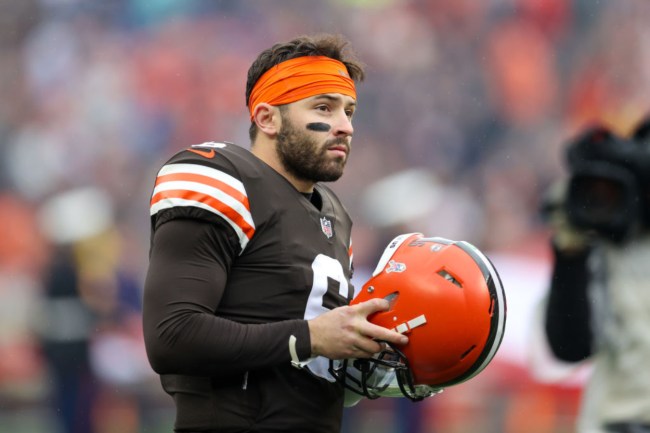 Despite the fact that Baker Mayfield’s future in the NFL is up in the air at the moment, things have been relatively quiet on the Mayfield front.

That isn’t to say that he’s simply sitting around waiting for the Browns to trade him, however.

According to NFL insider Mike Garafolo, Mayfield has been in Texas working out and throwing to a few different veteran wideouts.

“What I am told is that he is throwing with a couple of veteran receivers in Cole Beasley and Danny Amendola down in Texas,” Garafolo explained.

“Mayfield is continuing to get the work in. I would expect that that’s the way it’s going to continue until the situation with the Browns resolves itself. I wouldn’t imagine he’d go back to Cleveland for the spring session.”

From NFL Now on @nflnetwork: Baker Mayfield’s plan is to throw on his own (Cole Beasley, Danny Amendola and Alex Bachman are his current targets) while the #Browns work on a trade.

Garafolo explaining that he doesn’t expect to see Mayfield return to Cleveland for spring sessions is noteworthy.

Could Mayfield Be The Week 1 Starter For The Browns?

The Browns traded for Deshaun Watson, and signed him to a ginormous contract, in hopes that he would be their starting quarterback Week 1 of the regular season. Given the fact that he has 22 civil lawsuits pending, the league could still suspend him for a number of games.

This would leave the Browns in a bad spot and if Watson were to be suspended there could be a scenario where Cleveland hanging onto Mayfield could be beneficial.

Those dominos will fall into place when the league makes a decision on Watson, nevertheless, Mayfield staying away from Cleveland this spring could make things that much more interesting for the franchise.