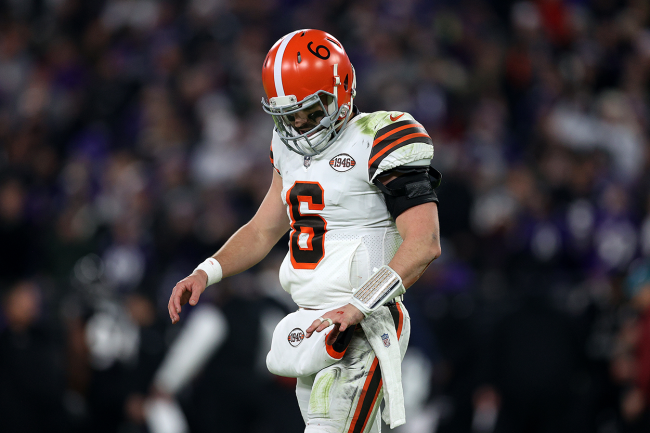 After a chaotic offseason that included all kinds of back-and-forth, he-said/she-said, the former Heisman Trophy winner and No. 1 overall pick is headed to Carolina. A trade between the Browns and the Panthers was announced on Wednesday afternoon that sends Mayfield south in return for a conditional fifth round pick.

Cleveland essentially traded its four-year starting quarterback for an “IOU” and is still set to pay him the majority of his remaining salary. Not ideal.

However, after trading for Deshaun Watson in the offseason and burning their relationship with Mayfield, the Browns didn’t have much of a choice. What’s done is done.

As things currently stand, there is a situation that exists where the trade is nullified. Mayfield could still end up back in Ohio.

The deal between Carolina and Cleveland is pending a physical. By all accounts, Mayfield is good to go for 2022.

But what if he isn’t?

After playing through a torn labrum in his left, non-throwing shoulder that was suffered in Week 2 last season, Mayfield had surgery in January. He was overwhelmingly positive ahead of his recovery.

Thanks to Dr. Limpisvasti and his team for performing a successful surgery. This is only going to be a minor bump in the road.. excited to get healthy and back to my normal self. Thank y’all and God Bless. pic.twitter.com/cRVdkB6t9d

A spokesperson from Cleveland said that Mayfield was likely to return to throwing by April in a light manor. His recovery timeline was approximately 4-6 months.

Fortunately, the injury occurred to his non-throwing shoulder. Even if he is not at 100%, he is likely able to throw anyway— as he proved last fall.

While that all sounds good, it isn’t definitive. What is definitive, is the Panthers’ physical. Once Mayfield lands in Carolina, the team doctors will evaluate the extent of his injury and how well he is recovering from his operation.

What if they don’t like what they see? The Panthers could determine that Mayfield is not fully healthy. That could lead to further negotiations between both sides about how much salary is being paid by which team and the deal could fall through all together.