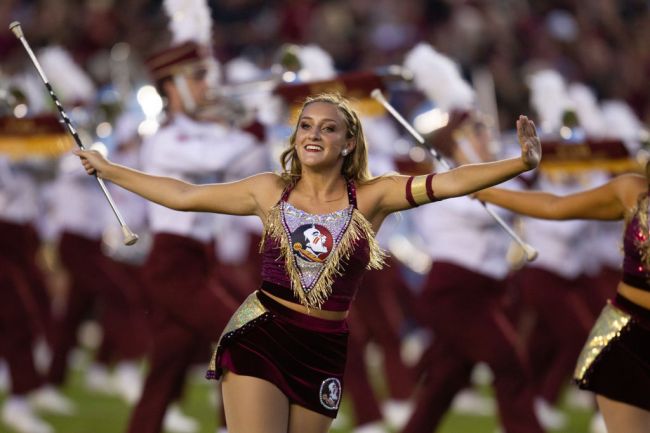 TikTok is the wild, wild West of the internet. The internet can be considered a free-for-all in general, but TikTok really allows you to manifest your own destiny and discover a way of life that is unbeknown to many. Of those many discoveries, you stumble on some pretty incredible people. There’s the beekeeper from Texas who scoops hundreds and hundreds of bees with her bare hands, people finding nasty things in their food, all kinds of doctors, “Gas Station Karen,” and Papa John. Oh AND there’s us, BroBible, who you should absolutely be following if you aren’t already!

I was most recently introduced to the world of #BatonTok, a sector of TikTok for baton twirling— and I couldn’t be more glad. It is the most exhilarating, mesmerizing thing that you will see today. I am vaguely familiar with baton twirling after spending four years at an SEC school and watching them during pregame and halftime performances, but I didn’t know just how insane it can get.

While there are all kinds of personalities in the world of baton twirling, two people in particular appear to own the majority share of virality on TikTok, and deservedly so. Let’s look first at Karrissa Wimberley. She is an International Champion Baton Twirler from Tallahassee, who attended both Florida State and Georgia, presumably twirling or dancing at both schools.

I would qualify her style of baton twirling (mind you, I know nothing about the sport? performing art? both?) as the more traditional practice. With that being said, she and her Intrepid Baton Twirling team are anything but traditional with their wild tricks and ability to incorporate trending songs and dances into their routines. Just watch how many times she spins on this first one. I’ve tried to count, but I think it’s seven times around? Just a casual 1820 while the baton is in the air:

And look how ridiculously high these two toss the baton, just grabbing it mid-twirl like it’s nothing:

Some of her other tricks are downright difficult, but she makes them look so easy. You won’t want to stop scrolling.

Walking into a three day weekend like…😍😍 Also ☝🏽 my niece was so excited to show off her footwork 🤩 #PlayBaton DC: ??? 🤨 #BatonTwirling #Baton

The other performer who dominates the TikTok side of baton twirling is Hidetaka Nishigaki. If Wimberley is traditional, I’d qualify him as more of a freestyle twirler. But again, what do I know, other than that they’re both awesome. Anyway, Nishigaki hails from Japan and brings the funk. Look at this insanity:

I mean seriously, how does someone move like that, pull his/herself together and then proceed to catch a spinning baton. Wild. Here are some more of his highlights:

♬ try to be cool but eh – yunnizhai

I fell down this rabbit hole for hours, and I’m not sure I ever want to get out. Enjoy some of the other twirlers who simply blew my mind:

♬ Look At Me! – XXXTENTACION