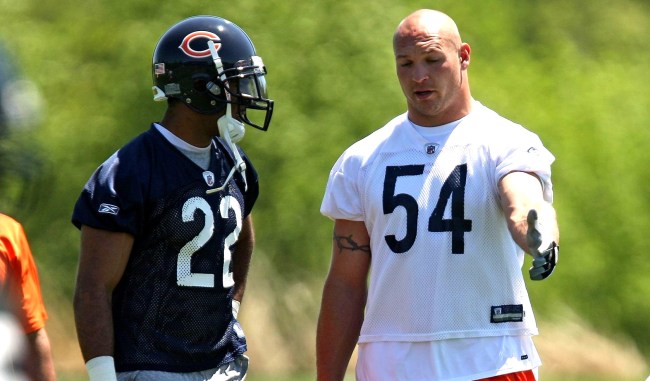 On Thursday, NFL Hall of Famer and former Chicago Bear great Brian Urlacher somehow compared Brett Favre playing a football following the death of his father to the NBA players’ boycotting their playoff games in protest of the shooting of Jacob Blake, the latest in an ongoing series of people of color being victims of police brutality.

“Brett Favre played the MNF game the day his dad died, threw 4 TDs in the first half and was a legend for playing in the face of adversity,” Urlacher wrote. “NBA players boycott the playoffs because a dude reaching for a knife, wanted on felony sexual assault warrant, was shot by police.”

Urlacher also reportedly liked a post calling for Kyle Rittenhouse, the 17-year-old who has been charged with murdering two protesters in Kenosha, Wisconsin.

Back in June, Urlacher defended President Trump’s threat to use the United States military against its own citizens.

So his stance on the NBA should come as little surprise. That doesn’t mean people weren’t appalled.

Former Bears running back Matt Forte, who was Urlacher’s teammate from 2008 to 2012 on the Bears, was among those who were offended by Urlacher’s comment.

“The comment @BUrlacher54 posted is void of empathy, compassion, wisdom and coherence,” Forte wrote on Twitter. “But full of pride and ignorance! I pray for those who have been blinded by their wealth, privilege and earthly fame that breeds arrogance in their hearts. And those who refuse to acknowledge racism and injustice but instead choose to place their energy into justifying it by quickly judging the victim’s life as if they themselves are more valuable because their sins are different or weren’t caught by man. But God sees all.”

Former Bears linebacker Lance Briggs, who played next to Urlacher for 10 seasons, was among those who retweeted Forte’s message.

The Chicago Bears also made it known that they too do not agree with their former star linebacker, writing in a statement that Urlacher’s “social media posts in no way reflect the values or opinions of the Chicago Bears organization.”

On Thursday, the Bears, along with several other NFL teams took the day off from practice in protest of the shooting of Jacob Blake.