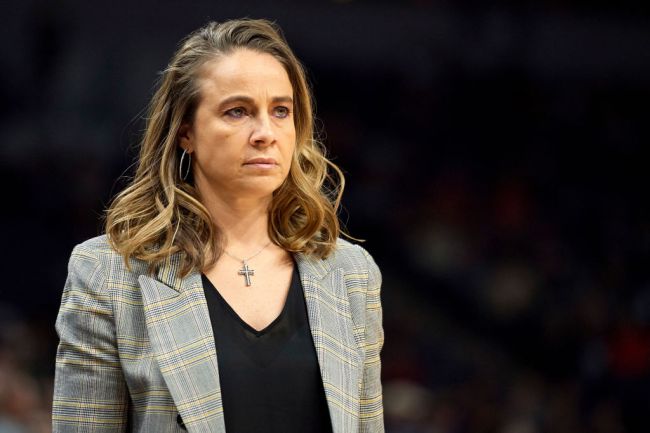 Becky Hammon continues to make history. The 43-year-old San Antonio Spurs assistant became the first woman to serve as head coach of an NBA team in a regular season game on Wednesday night after Gregg Popovich was ejected in the first half against the Los Angeles Lakers. She had previously been the team’s acting head coach last season when she led the team through an exhibition loss to Milwaukee in the bubble.

Popovich was sent to the locker room by head official Tony Brown following a missed call on guard DeMar DeRozan with 3:56 remaining in the second quarter. He received two technical fouls for arguing with the crew and applauded by several of the team’s family members in attendance as he exited the court.

Greg Popovich was just ejected from the gamepic.twitter.com/sonsgUaPbW

Hammon took over in his absence and called plays for the remainder of the game. San Antonio lost 121-107 to Los Angeles on Wednesday, but the moment should not be overshadowed.

She's believed to be the first woman to act as head coach during an NBA regular-season game. pic.twitter.com/VyQqVNaPhc

A three-time All-American at Colorado State, Hammon played 14 years with the New York Liberty and San Antonio Stars in the WNBA and overseas before retiring to join Popovich’s staff in 2014. She became the first full-time female assistant coach in league history. On July 3, 2015, Hammon was tapped to lead the Spurs’ Summer League team and she led them to a title that month.

Her regular-season head coaching debut almost came on No. 18, 2019, the last time Popovich was ejected. It was head coaching by committee on that night but while Hammon led the charge in the huddle, Tim Duncan got the nod as acting head coach.

She spoke to the media after the game on Wednesday.

#Spurs assistant coach Becky Hammon became the first woman to direct a team in #NBA history after taking over against the #Lakers following Gregg Popovich’s ejection.
Here's what Coach Hammon had to say as she reflected on the night and historical moment. #KSATsports #KSATnews pic.twitter.com/haRi6dvyF2

Becky Hammon is an icon.