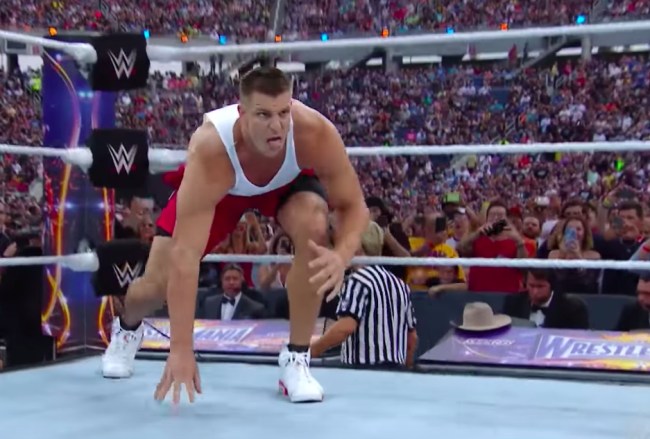 After months of speculation, Rob Gronkowski hopped on Instagram last weekend to announce his NFL career had finally come to an end after nine seasons with the New England Patriots.

Last year, Gronk revealed he’d only purchased a single thing with the $60 million in salary money he collected while playing for the Patriots, so while he’s basically set for life, no one really thinks we’ve seen the last of the world’s biggest fan of the number 69.

Following his announcement, one sportsbook posted odds concerning what the former (it still hurts to write that) player is going to do with his life now that he’s hung up his cleats, and while you’ll make a sizeable return on your investment if he decides to become a male stripper, the powers that be seem to think “professional wrestler” will be his next job title.

It wouldn’t be the first time Gronk has stepped into the ring—during Wrestlemania 33, he left the stands to help out his buddy Mojo Rawley.

I personally enjoyed the moment but it appears not everyone was a fan.

WWE’s Becky Lynch—who will be headlining Wrestlemania this year in a triple threat match against Ronda Rousey and Charlotte Flair—recently spoke with TMZ Sports and revealed she doesn’t think Gronk has paid his dues.

“Wouldn’t that be nice to never have done anything in wrestling and just go into Wrestlemania? I would love that.

Some of us almost get fired and have to work our way and scratch and claw, and then we come to the main event. Other people are just, ‘Here you go, here’s your debut match, WrestleMania. See you at WrestleMania.’”

I smell a mixed tag team match in the works! Don’t let us down, Mr. McMahon.