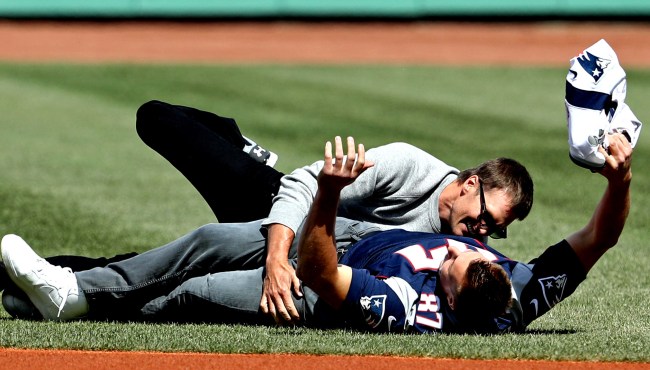 Do you think Rob Gronkowski is aware that his whole life is basically just a never-ending fantasy camp?

Especially now that he’s retired and the “Summer of Gronk” has become a full-time endeavor, no one is living a better life than the former Patriots tight end.

And speaking of playing tight end for the Patriots, Gronkowski did something during a New England pre-draft meeting that pretty much anyone else would never have gotten away with doing. During his pre-draft visit to Foxboro to meet with head coach Bill Belichick Gronk fell asleep… on the floor.

Take it away, Hoodie…

“Rob was kind of a shot in the dark. He came up on his pre-draft visit, had a bad visit,” Belichick shared with NFL Network. “We put him in a room, came back, he was asleep on the floor. Didn’t make a very good impression. I brought him in, you know, we’re getting ready to have a meeting with the coaches and go through, then fell asleep on the floor. Like, oh boy. You know, so… kind of got a slow start there.

“Went to Arizona, didn’t do much as a freshman, had a decent year as a sophomore. Caught 30 passes, and then misses junior year with back surgery. And then came out early for the draft. So there wasn’t much to go on,” Belichick continued. “We traded up for him and we just kind of bet that he would come through. He certainly did big-time.”

Gronk made an interesting first impression on his pre-draft visit to Foxboro 😂@RobGronkowski | #NFL100 pic.twitter.com/qewRBD0CEw

How? How did Gronk fall asleep on the floor during his pre-draft meeting with The Hoodie of all people and still manage to be taken with the 42nd pick by New England in 2010? Heck, they even traded up to get him! And then they grabbed Aaron Hernandez in round four! (Who was damn good too until he, you know, killed someone.)

No wonder the Patriots are on their way to winning their 17th AFC East title in 19 years (and tied for first, losing a tiebreaker, the other two seasons).