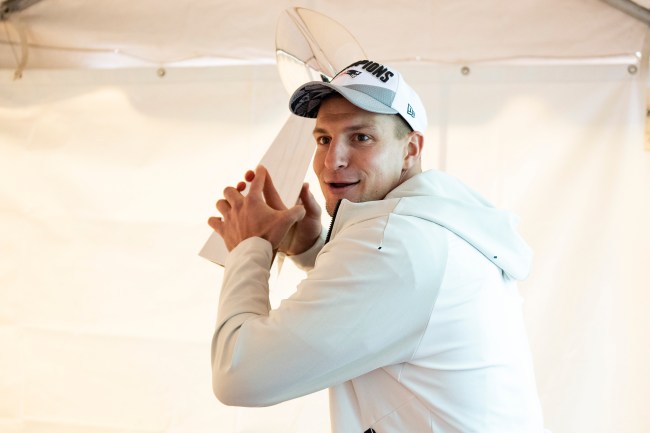 Rob Gronkowski might be retired from the NFL, but, c’mon, nobody’s ever going to stop talking about one of the biggest bros the sport has ever seen. Between his monster spikes after scoring touchdowns, his beer-chugging while celebrating Super Bowl wins and, well, overall Gronk-ness, the guy was as all-time off the field as he was on it.

While there are plenty of unreal Rob Gronkowski stories out there, one of the more recent came during the New England Patriots’ visit to Fenway Park earlier this year to celebrate their most recent Super Bowl win, where Gronk and some of his teammates were going to throw out the first pitch. Of course, prior to doing so, the former tight end thought it’d be a good idea to practice his baseball swing — while using the Lombardi Trophy — which left a dent in the damn thing. Take a look at the video below.

.@RobGronkowski left a mark on this organization.

And on the sixth Lombardi. pic.twitter.com/t5IVTyCXcA

Although we got a couple reactions from some of Rob Gronkowski’s former teammates about how it all went down, Gronk finally opened up about what happened during a recent appearance on “The Rich Eisen Show.” Take a look at how he described everything, and how he was lucky to avoid any punishment for denting the Lombardi Trophy.

“Oh, man. We were just messing around and Julian, you know, was pretending to be the ace pitcher,” Gronkowski said. “I just hopped up and pretended I was at bat because we were waiting there for a little bit so we started goofing off. I actually bunted it. I can’t do a swing, but I was like, ‘I’ll do a bunt.’ I didn’t think it was going to do anything to the trophy. I didn’t even think about it and then I handed the trophy off to a teammate and he’s like, ‘Yo, you dented the trophy’ and I was like, ‘No way.’ So then we finally saw it and we lost it. I wasn’t really in a panic, though. Our PR guy was like, ‘Rob, what are we gonna do?’ and I was like ‘I don’t know.’ I was like, ‘We’re gonna go hold it up in front of the fans.’”

Gronkowski didn’t face any consequences for the dent, but if he’d been called into question, he was prepared to throw the Super Bowl LIII MVP under the bus.

“It all went smooth, no one got in trouble,” Gronkowski said. “It’s actually something that’s pretty cool now because everyone hits me up like, ‘Yo, I’m gonna go see the trophy in the Patriots Hall of Fame.’ Everyone goes and sees it and sends me pictures of them with the trophy with the dent in it. So it’s kind of like a thing now, but I already knew what to say if I was going to get in trouble. Like, Julian threw the pitch. If he just didn’t throw the pitch, it would’ve never happened.”

There are plenty of ways people are going to remember Rob Gronkowski as a player and hilarious character off the gridiron, but there’s nothing more fitting than the future Hall of Famer leaving his mark, quite literally, by denting a league championship trophy. The fact that it just adds to his legend is why Gronk will always be the F’in man.