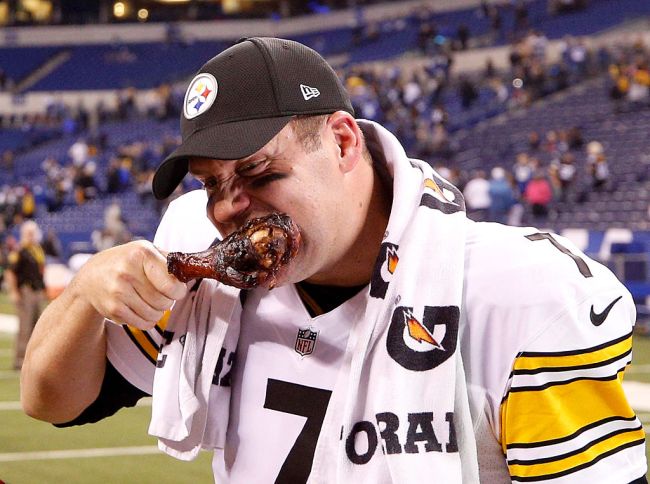 Back in December, we spoke with NFL insider Jay Glazer about the fallout that came with saying Ben Roethlisberger and fitness are “allergic” to each other. Glazer said that the 39-year-old’s idea of a great off-season workout program is “doing one yoga session, playing golf, and drinking some beer.”

This did not sit well with Big Ben, who phoned Glazer the following day and admitted that he while he’s never been a big “workout guy,” he’s really throwing himself into fitness during the twilight of his career.

Seven months later, it was reported that Roethlisberger is in the “best shape of his life,” adhering to a diet stricter than Tom Brady’s, according to Ben’s camp.

Welp, the big reveal has finally come as the 18-year vet arrived at training camp Wednesday, and I’ll be damned.

As Ben Roethlisberger reports to his 18th #Steelers training camp, it’s bold prediction time:
1) He WILL go under center.
2) He WILL call run plays. (Happily.)
3) His deep ball will NOT be the cause of consternation it was last year. pic.twitter.com/orR0bFfXnr

The Fat Bastard memes days are over. Fat Thor, good riddance. Ron Burgandy guzzling gallons of milk while going off the rails, find a new slant.

We are ushering in a new era: Bony Ben.

I guess fat-shaming really does work?

“Ben will never mention the beating he has taken in the media but says from a dedication standpoint has never seen anything from Ben close to this in past. Source say obsessed with diet & workouts. “ https://t.co/xiezHzYrUj