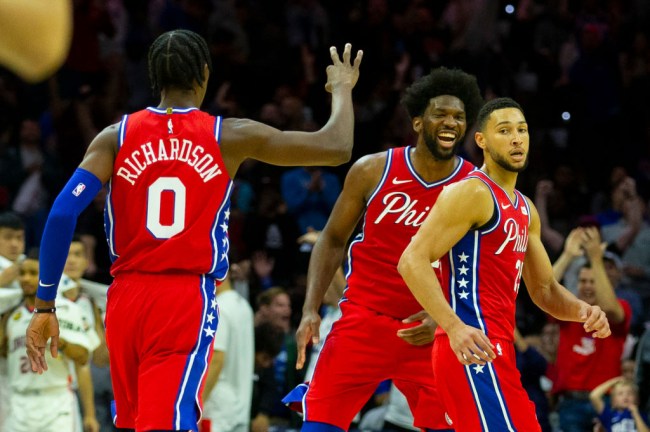 Ben Simmons was one of the most highly touted prospects to come out of college in 2016, and while some people had questions about his work ethic, that didn’t stop the 76ers from scooping him up with the first pick in the draft that year.

Simmons suffered a major setback when he was sidelined with a foot injury during training camp but managed to make his triumphant return the following year and earned Rookie of the Year honors following a standout season, which was especially impressive when you consider he can’t shoot for shit.

While you’d think someone who was selected with the first pick would have a pretty well-rounded game, that wasn’t the case for Simmons, who relied almost entirely on racking up points in the paint to help earn the aforementioned honor.

However, Simmons has been doing what he can to remedy the problem, and over the summer, he caused everyone to freak out after a video of him making a three-pointer during a scrimmage started to circulate.

On Tuesday night, Simmons found himself playing in another meaningless game when the 76ers faced off against the Guangzhou Loong Lions in a preseason contest.

However, things got a lot more meaningful in the closing seconds of the second quarter when he pulled up from behind the arc and swished a three.

Everyone in the arena lost their mind and the same can be said for the denizens of NBA Twitter, who reacted accordingly.

ben simmons to the rest of the league after hitting a three pic.twitter.com/IeBIIjN19d

The entire city of Philadelphia when Ben Simmons hit that three pic.twitter.com/NwXVQ4sJH3

“Oh Ben Simmons didn’t just make a three, he stepped into one and splashed it!” #Sixers pic.twitter.com/CVvB3WeUhI

Ben Simmons' 3 will go down in history. pic.twitter.com/7PyFS1AQcZ

Tobias Harris on Simmons: “He’s one of the best shooters in the history of basketball. 100 percent from three, so I don’t want to hear nothin.”

According to ESPN, this is the first trey Simmons has made in a game since he drilled one in college in 2015, which was the only three he made during his time at LSU.