Ben Simmons Was Reportedly Being Shopped By Sixers For Being An ‘Uncoachable, Regular Season Player’ 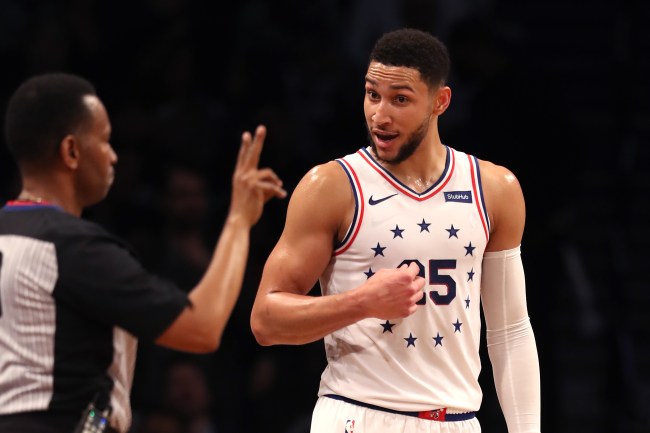 Ben Simmons was the No. 1 overall pick just two years ago and is one of the best young talents in the NBA, but his current team, the Philadelphia 76ers, reportedly thought they might want to move on from the rising star earlier this season. Simmons, who is coming off one of his best all-around playoff games of his young career, is a polarizing figure who still lacks a little bit of maturity — evident by his lame war of words with Brooklyn Nets forward Jared Dudley in this NBA Playoffs — and, per Chris Sheridan of the New York Daily News, that type of ego, along with his supposed deficiencies come the postseason, had the team’s general manager, Elton Brand, thinking about trading the 22-year-old.

According to Sheridan’s report — which is a story about Sixers head coach Brett Brown’s future, along with the current state of the team’s locker room — Ben Simmons sat out a 21-point drubbing by the Orlando Magic on March 25 with what was described by the team as a “stomach virus.” Apparently, according to a source close to the team, Simmons had spent the previous night partying in Orlando, and the “stomach virus” was a complete fallacy.

While that’s something that probably happens on occasion for NBA teams — after all, it’s a long season and players are human — the real shocker from the New York Daily News piece comes with the report that the 76ers were reportedly dangling Ben Simmons’ name out there during the trade deadline because he’s both “not coachable” and is just a “regular season player.” Here’s what the report said.

A source who spoke to the Daily News on condition of anonymity said general manager Elton Brand made it known to ownership sometime before the trade deadline that the organization needed to consider trading Simmons because the youngster was simply not coachable, and was a regular-season player annually exposed in the playoffs.

The idea was immediately shot down, and Brand was told that Simmons and Embiid were untouchable – even if Anthony Davis was the prize.

Ever wonder why Simmons is such a poor free throw shooter? It is because he does not bend his knees. Countless coaches have tried to tell Simmons that bending his knees would solve his problems, but he refuses to listen.

Sure, the idea report also mentioned that the Sixers deny that Brand even suggested such an idea, but this is also the team, per sources, that covered up Ben Simmons’ apparent hangover as a stomach virus just a few weeks ago as they made a push for seeding in the Eastern Conference playoff race. Given the timing of all this, too, with the point guard making headlines for his “average” half court skills offensively, as well as the guy calling out Sixers fans after being booed in Game 1, it’s just a bad look for the player.

Ben Simmons is a budding star in the NBA, but, like some, his ego may be too big for his own good. Who knows if this report is true or not, but, if so, it’ll be interesting to see if the Sixers actually considering moving the point guard if they don’t make a serious run at the NBA Finals this year, given the talent on the roster. If it leads to a superstar like Anthony Davis, or someone else, it might be too tempting to say no.