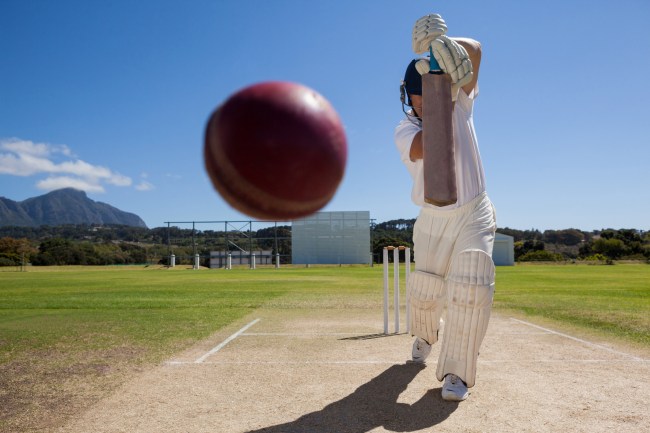 Now that we’ve gotten that out of the way I think we can also assume that most of us don’t have a fucking clue what the rules of Cricket are. I tried watching some Cricket on my honeymoon a few years back in St. Lucia because it was always on TV there for some reason but I couldn’t make heads or tails of what was happening.

I do know that the ICC Cricket World Cup 2019 is currently taking place in England and Wales because I was watching Sky Sports earlier this week and they mentioned that. This clip below comes from a game between England and South Africa in the Cricket World Cup and unless my eyes are deceiving me the score is 180-7 which is just fucking insane. Scores should not go that high in any sport.

This absolutely unbelievable catch in the outfield (do they call it the outfield?) from England’s Ben Stokes helped propel them to an opening win over South Africa and this catch has since gone viral because it’s probably the only Cricket highlight that American sports fans like myself can appreciate. They’ve got the clip at full-speed and slowed down so you can really see how outrageous this grab was:

Here’s a recap of what happened from The Guardian and if I’m being honest, I think this reads like a Tolkien novel to me with some made up words in there just to see if anyone’s paying attention:

The all-rounder was back to his dominant best in the 104-run win against South Africa, top-scoring with 89 as England posted 311 for eight. A run-out and two wickets in two balls then helped to skittle the visitors for 207 in 39.5 overs.

But it was his soaring effort to remove Andile Phehlukwayo in the deep that left a sold-out Oval crowd astounded. It was the jewel in the crown of England’s faultless fielding performance, even if Stokes himself admitted it was only possible due to an error on his part.

“To be honest I was in the wrong position,” the all-rounder said of the catch. “If I was in the right position it would have been regulation. That feeling for about five seconds when I was facing the crowd and everyone was cheering, it was phenomenal.”

Eoin Morgan, who struck 57 in a stand of 106 with Stokes, said: “He’s had a full day out. We see him do stuff like that in training and you just shake your head. Today his all-round game was on and that’s great for us at the start of a tournament. He’s at the top of his game. (via)

I repeat, scores SHOULD NEVER get that high in sports. England scored 311? I don’t understand the ‘for eight’ part of this report but I see that they scored 311 which should not ever happen in sports. That’s straight up inflation.

It’s unclear if the ICC Cricket World Cup 2019 is even on TV here but if it is and you’re interested then I’m sure you can search your TV guide for listings. The time change shouldn’t be too bad since it’s in England/Wales and they’re only 5-hours ahead.

For more on this, you can click here to visit The Guardian. (h/t Hot Clicks)