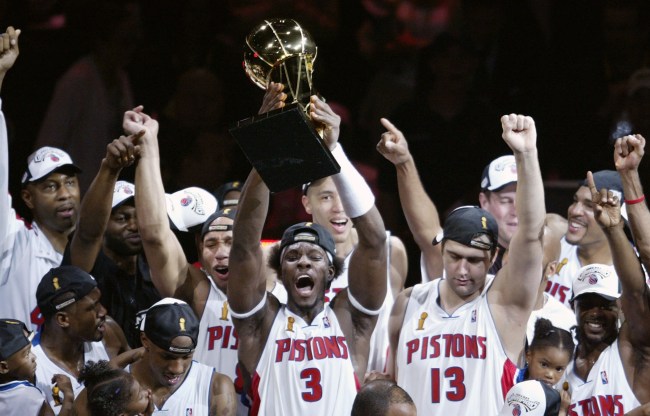 Ben Wallace knows what it takes to be a champion. After earning an NBA title with the Detroit Pistons in 2004 with a wild upset over the heavily-favored Los Angeles Lakers — who sported a team of four Hall of Famers in Shaquille O’Neal, Kobe Bryant, Karl Malone and Gary Payton — the big man knows that the team with the most talent doesn’t always win. It’s part of the reason why his Pistons were able to hoist the Larry O’Brien Trophy 16 years ago; because his locker room had more chemistry than the Lakers’ did, which boasted too many egos.

While many remember the Pistons beating the Lakers that season, some may forget that the team actually held the No. 2 overall pick in the star-studded 2003 NBA Draft, which boasted future Hall of Famers like LeBron James (No. 1 pick), Carmelo Anthony (No. 3 pick), Chris Bosh (No. 4 pick) and Dwyane Wade (No. 5 pick). Sandwiched between all those guys? Darko Milicic, a then 17-year-old from Europe who was the great unknown of that draft class.

Taken with the No. 2 overall pick by the Pistons, Darko entered a locker room primed for a title run. He didn’t play often, if at all, and, while it may have ultimately hurt his NBA career, it didn’t disrupt the team’s chemistry. Milicic knew his role and went about his business on a team of veterans, and it helped Detroit all season long.

It’s that selflessness that Ben Wallace says separated Darko from Carmelo, and why, in the big man’s words, is why the Pistons were able to win a title.

Recently joining the 120 Watts podcast, Wallace described the reason why choosing Anthony instead of Milicic — which many fans look back on now as a missed opportunity — wouldn’t have led to a championship that season. Take a look below.

Look, say what you want to about the Pistons earning the “Human Victory Cigar” over a future Hall of Famer, but Ben Wallace has it right here, because Melo would’ve absolutely come in with a bigger ego and a bigger pedigree, meaning he (probably) wouldn’t have meshed well with the veterans in Detroit’s locker room. His sense of entitlement could’ve derailed the team’s title hopes, especially after he led Syracuse to the national title in his lone college season.

On the flipside, it’s interesting hearing Wallace describe how Darko came in and sort of thought that he “couldn’t play yet.” It’s not necessarily the mentality many would think a No. 2 overall pick would have, but it ended up working wonders for the Pistons in 2004, and helped them keep a strong chemistry in the locker room by avoiding internal distractions.

Still, the Pistons choosing Darko Milicic over Carmelo Anthony — or any of the other future Hall of Fame players in the ’03 draft — is one of the great “what if…?” debates in sports history. Is Ben Wallace right in his claim that the team wouldn’t have won? Would Melo had been humbled and be groomed by the veterans on that team? Or would Detroit had set themselves up for a longer championship window for the next decade? If only sports fans had the answers.