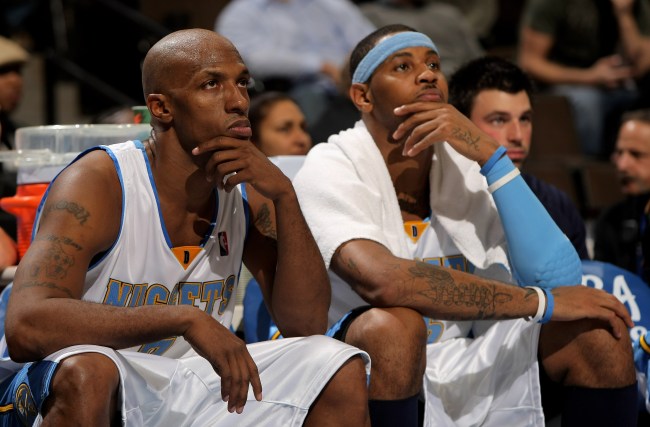 And then there’s Carmelo Anthony, whose future in the NBA is uncertain. At 35, Carmelo will never return to the man Paul Pierce once claimed was the hardest player to defend in his career, and his ability to morph into merely a cog in a bigger wheel is why he’s yet to secure a roster spot.

Former teammate Chauncey Billups, who played with Melo on the Nuggets and Knicks, revealed this week why he believes Carmelo is no longer in the NBA. He started by heaping praise on Melo, before changing his tune and getting real.

Chauncey Billups shares why he thinks Melo isn't in the NBA anymore.

I’ll tell you what, it’s so crazy. I feel bad for Melo and here’s why–Melo was like a good teammate, man. Melo practiced every day. He didn’t miss any games.

But I think now you fast forward the tape, and the reason why he’s not in the league, because he’s still worthy, is he hasn’t mentally taken that step back to say, “Ok, I’ll come in and play against back-ups. I’ll try to help the team out. I know I might not be able to close, but I just want to help.”

Well, he’s not there yet.

Carmelo is still practicing like it’s the 2004 Athens Olympics.

The Lakers were at their lowest , Lebron didn’t know what to do… he turned to the only man that could save them…. a man who spent the entire season preparing for this moment… the most decorated Olympic basketball player of all time… Carmelo Anthony pic.twitter.com/pkw2KLcB1e