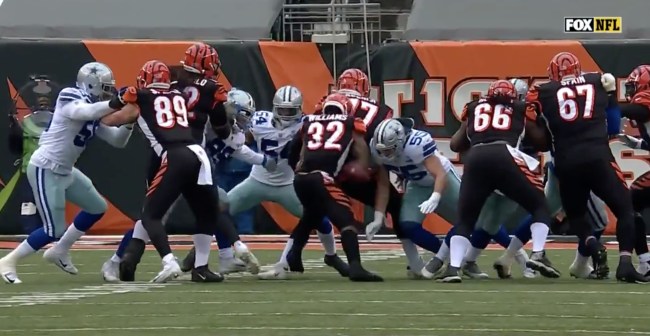 Step aside Mark Sanchez, there’s a new sheriff in town. Cincinnati running back Traveon Williams is officially the new butt of every joke. The Bengals’ rusher took the handoff from quarterback Brandon Allen and ran directly into his right guard Hakeem Adeniji. That was only the beginning of the hilarity, however, as Williams’ head hits his lineman square in the back and the ball hits him in the rear end, forcing a fumble. Thus, the Butt Fumble 2.0 was born.

Butt Fumble 2: Return of the Derrière

Coming to a Bengals team near you…pic.twitter.com/bpkKKXvr6q

Not only did Williams lose the ball, but the turnover resulted in a scoop-and-score from Cowboys pass rusher Aldon Smith. Smith, who was out of the league for nearly four full seasons prior to 2020 due to violations of the league’s substance policy, picked up the loose ball and returned it 78 yards for a touchdown.

Aldon Smith recovers the fumble and goes 78 yards to the house!

This is not the first instance of butt fumblery, of course, as Sanchez first became famous for the blunder on Thanksgiving Day eight years ago. The Jets quarterback ran a draw on a busted play and got absolutely clobbered by his offensive lineman’s behind.

The Bengals went on to lose Sunday’s contest by a large margin and Williams will forever be forced to live with the incredibly embarrassing moment. He wasn’t even supposed to be the team’s primary ballcarrier, as he is Cincinnati’s third-string running back, but starter Joe Mixon was out and Giovani Bernard was pulled from the game after he fumbled on his first carry of the day.

Williams’ fumble was not the last either, as the Bengals fumbled on their first three possessions of the game, becoming the first team to do so since the 2013 New England Patriots. It was also the first time that two different Bengals fumbled in the same game since 1994.