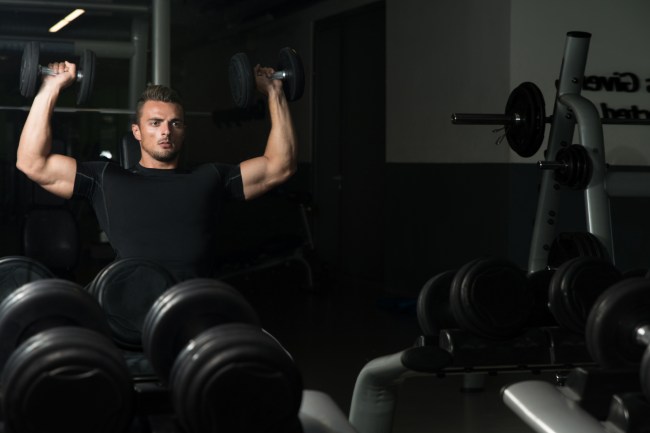 Welcome to Part 1 of a 7 part series on the best exercises for mass. Today, we’re starting at the top, and talking about shoulders…

When it comes to training shoulders, you want to focus mostly on compound exercises, and heavy weights. Shoulders respond best to lower rep, heavy weight-type training, and isolation exercises don’t lend themselves too well to that.

Keep reps 10 or less with weights starting around 80% of your one-rep max and go from there.

The first two exercises on this list are really interchangeable. However, I like the seated dumbbell (or barbell) shoulder press because it allows you to overload the shoulders more.

Plus it feels pretty badass throwing big dumbbells over your head.

Both the standing and seated shoulder press allows you to better target the medial deltoids. The advantage that the standing overhead press has is that it’s more of a total body lift

The Arnold press – popularized by Arnold Schwarzenegger himself – are a great exercise for hitting the anterior delts. This is because the weight actually starts in front of the shoulders and goes through a larger range of motion than with your typical shoulder press.

While the anterior delts get a lot of work from other pressing exercises, front raises are a great way to isolate them for additional sculpting.

Overhead pressing is great for targeting the medial delts, but should not be your only weapon. Side lateral raises should be added in as well.

As you move up in weight, you’ll likely need to switch to single arm lateral raises to maintain proper from.

For well-rounded shoulders, you need to make sure you’re hitting the posterior delts as well, as they don’t get a lot of work through traditional pressing exercises.

Keeping up with the posterior delt theme, the rear delt row is another fantastic exercise for targeting them. While similar to a bent-over barbell row, the rear delt row differs slightly in that the barbell is brought higher up on the chest, recruiting more of the rear delts and less of the traps.

In addition to hitting the rear delts, face pulls are also fantastic for strengthening the rotator cuff muscles.

Upright rows get a lot of hate, but when done correctly, are actually an effective shoulder-building exercise. The standard grip helps target the medial delts, while a wider grip will work the posterior delts more.

Few things are more impressive than a bro with boulder shoulders. Use these exercises, combined with a good nutrition plan, and watch those shoulder grow.