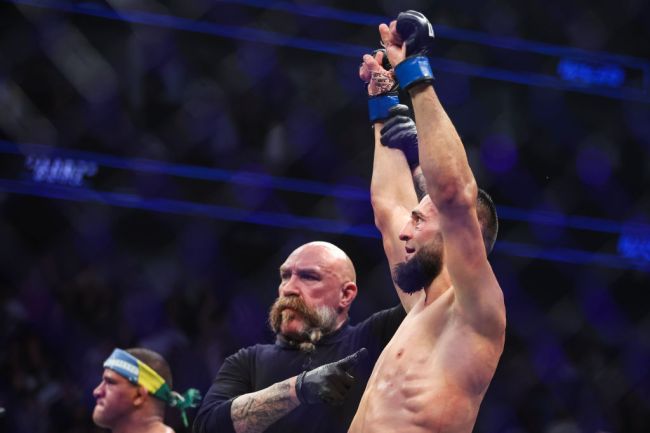 Khamzat Chimaev was involved in an instant classic on Saturday night when he engaged Gilbert Burns in a 3 round slugfest. The two men exhaustedly swung to the closing bell, but neither was able to find a finish as Chimaev edged out a unanimous decision.

The fight was the most engaging of Chimaev’s career so far and proved that he can compete at the top of the welterweight division. However, there were some that believed his stock dropped after this fight because of how competitive it was and because he was unable to find the finish.

It would appear there is at least one sportsbook that disagrees with that assessment. BetOnline released opening lines for hypothetical fights against Colby Covington and Kamaru Usman today and those lines show that there are still very high expectations for Chimaev.

Khamzat Chimaev has opened as a betting favorite (-125) in a potential matchup with Colby Covington (+105).

He moves to an underdog (+115) in a potential title fight against UFC champ Kamaru Usman (-135). Odds via @betonline_ag.

While Chimaev’s fight against Gilbert Burns shouldn’t hurt his stock in away, it should have made it clear to many that there are two men in this division that would have one major advantage over Chimaev.

Those two men are Kamaru Usman and Colby Covington, who push absolutely ridiculous paces in the Octagon and never wear down. The two men combined to attempt over 700 strikes in their first fight against each other and more than 600 in their second. That is simply not a pace that Chimaev can keep, as we saw in Saturday’s fight.

Chimaev was actually outstruck by Burns in rounds 2 and 3 of that fight and didn’t face nearly the same takedown threat he would against Covington or Usman.

Could he knock either of them out early in a fight while he’s still fresh? It’s certainly a possibility, but it’s not something we’ve ever seen happen to either man. Usman has’t lost in the UFC and has never been stopped by strikes.

Covington has only been stopped by strikes once in his career and that was after Usman had landed 175 strikes on him and broken his jaw.

Wrestling could be an option for Chimaev against Covington as Colby has been taken down by a few opponents, but he would still need to find an early finish or this approach would likely be too draining for him to maintain.

That is probably not an option against Kamaru Usman who has never been taken down in the UFC.

While it is abundantly clear that Chimaev is a very talented fighter and could already be the 4th best welterweight in the UFC, but it’s hard to see how either of these betting lines makes sense. His path to victory against either fighter is not nearly as clear as his paths to defeat.

It might be time to reconsider the Chimaev hype when considering matchup between him and either of Covington or Usman.