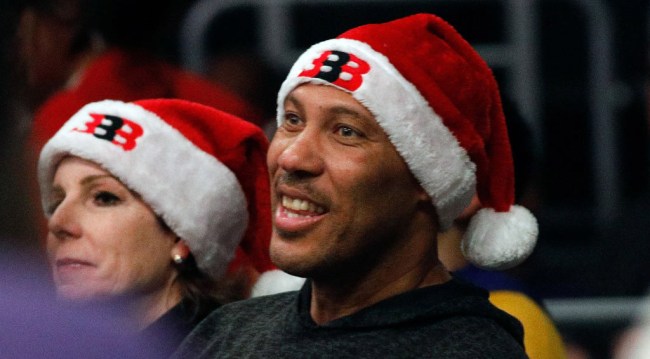 On Monday, it was revealed by TMZ Sports that LaVar Ball’s Big Baller Brand has received a rating of “F” (the worst rating) from the Better Business Bureau due to a slew of complaints. Apparently, Big Baller Brand hasn’t been very good about fulfilling their customers’ orders. Go figure.

The complaints have been mostly about orders that have never been received and customers who have received items other than what they ordered. Motably, ESPN’s Dan Le Batard bought $1,000 worth of Big Baller Brand shoes only to wait over seven months to finally receive two pairs he didn’t actually order.

A quick look at the Big Baller Brand page and you see that the company currently has 45 negative reviews, zero positive reviews and 32 customer complaints on file with the Better Business Bureau.

The BBB reached out to Big Baller Brand twice to help resolve their issues — but no one at Big Baller ever called them back.

“This is very definitely substandard normal business practices for anybody.”

“As a result of the repeat pattern of complaints, the volume of complaints, Big Baller now has an F rating with the BBB, which is the lowest rating possible in the BBB system.”

The complaints on the BBB site are comical as hell too. Here are a couple of examples…

“This company does not offer refunds. I purchased 2 items and was told there would be a 1-2 week delay. I have been waiting 6 weeks now, and when I asked why it was taking so long, I was called a “small baller”. At this point I believe they have decided to steal my money.”

“Placed an order via the company’s website for a sweatshirt that costs $85. I received confirmation of the order right away. After 2 weeks i contacted the company for an update and they sent me a tracking number for USPS. I later found out that the tracking number was a fake and no package had… been shipped. Nearly a month later the company continues to ignore my emails and inquires regarding my order. I filed a fraudulent transaction with my bank and hope i can get my money back. The only reason i even waited this long is because my son REALLY wanted this sweatshirt. Shame on this company for scamming their customers. Hope they go out of business soon!”

Now if you think LaVar Ball is worried about his Big Baller Brand getting an ‘F’ rating from the Better Business Bureau, you don’t know Ball.

Quick question… can the real BBB sue the new BBB for trademark infringement. Because that would be fun.

“Holidays always slows shipping,” Ball said. “But we stay on top of customer service. It’s probably Nike and Adidas complaining about not getting their Big Baller Brand merchandise.”

For what it’s worth, Adidas America has a D-minus rating with the BBB and they seem to be doing just fine these days.

So… have you copped your limited edition LaMelo and LiAngelo Lithuanian jerseys yet? At least those are sold by Amazon so they might actually get delivered.