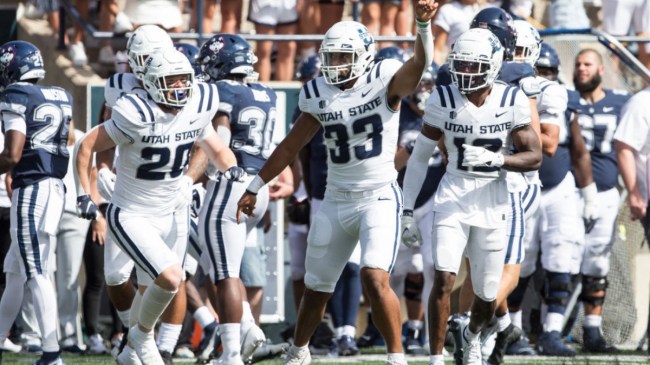 Back in April, a surprising bet came in at Caesars Sportsbook. One bettor had wagered $1000 on Utah State to win it all.

Strange note from @CaesarsSports.
They have now received three $1,000 bets on Utah State to win the college football playoff.

The team is only at halftime of their first game of the year and it already looks like they have no chance of that bet winning.

The Aggies are taking on top-ranked Alabama in their season opener and are already down 41-0 at the half and the game has been full of rough moments for Utah State.

OH MY WILL ANDERSON 😤 @AlabamaFTBL pic.twitter.com/aaLMD057eW

For Utah State to have any chance of even making the College Football Playoff, they had to beat Alabama today.

Based on how close Cincinnati was to not making the playoff last season, even a win over Bama might not have been enough to guarantee a CFP spot.

With one loss and a schedule that mostly consists of matchups against a weak Mountain West, the dream seems to already be over.

The bettor who took Utah State should likely already be looking for the cash out button before Utah State’s opening game is even over.

At this point, even anybody who bet Utah State +41.5 for today’s game have to be wondering if their might have been something better they could spent their money on today.