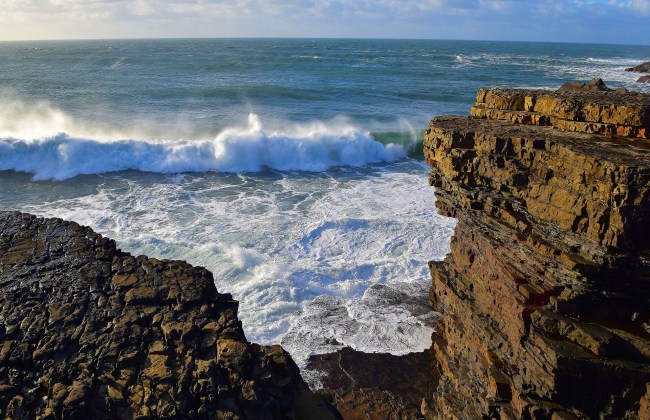 When Hurricane Epsilon made its way to Europe at the end of October it brought some historically massive waves. Sure, there have probably been some bigger waves in Europe at some point in history but not since surfers have had the ability to be pulled into a wave using jet-ski tow-in technology and ride these skyscraper-sized waves.

I brought you guys a ton of big wave surfing clips from Nazaré, Portugal which is home to the largest wave break on the planet, one that’s yielded multiple world records. You can check out the best rides and the gnarliest wipeouts from the action at Nazaré if you want to get caught up. For now, we’re taking a look at The Emerald Isle where Conor Maguire surfed a 60-foot wave that’s said to be the largest ever surfed in Ireland.

26-year-old Conor Maguire lives a stone’s throw away from Mullaghmore which is home to Ireland’s largest waves. When Hurricane Epsilon brought the swell to Ireland he told the Irish Examiner “I could hear the deep bass from the ocean rolling through my house, the sound was echoing through the walls, I knew we were in for something special.” So he hopped in his car and made the 10-mile drive to catch a once-in-a-lifetime wave that’s now being called the largest wave ever surfed in Ireland.

It’s not often you get to take on waves hitting 60 FEET off Ireland’s Wild Atlantic Way!

Our elite athlete Conor Maguire did just that at Mullaghmore today 🌊 🏄‍🇮🇪

Conor’s a Red Bull Surfing sponsored athlete and this is a pretty cool clip from their channel released in the aftermath of this historic wave. This is an interesting look at who the faces of Big Wave Surfing are in Ireland right now, the souls who are crazy enough to paddle out into frigid North Atlantic waters to catch waves.

I don’t think I’d ever heard about or even considered surfing as a sport in Ireland until the 2003 surfing/travel film Step Into Liquid with global surfers and their secret spots profiled, including the Malloy Brothers in Ireland. I think that film really did a lot for opening the world’s eyes to the potentially untapped pristine waves in Ireland.

While that 60-foot wave surfed by Conor Maguire pales in comparison to some of the waves at Nazaré it’s still one of the largest waves that will be surfed anywhere in the world in 2020 and for now it goes into the record books as the largest wave ever surfed in Ireland. There is another storm headed towards Europe though so it’ll be interesting to see what sort of swell that brings.