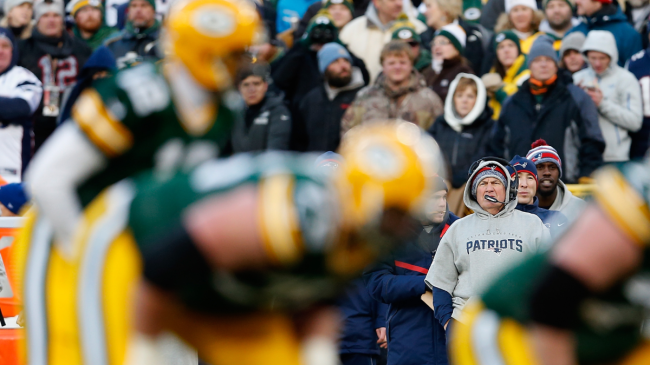 Aaron Rodgers has rehashed an old debate following some recent comments ahead of the Packers’ matchup with the Patriots – Is Tom Brady or Bill Belichick most responsible for New England’s dominance throughout the last two decades?

The two paired up in Foxborough for 20 seasons, both arriving in the 2000 campaign. Between 2000 and 2019, the Patriots won six titles to become the greatest dynasty of the era.

The franchise captured lightning in a bottle with the duo, but they both played a large role in sustaining the success of the organization over those 20 seasons.

That won’t stop fans from debating which was more influential in the Super Bowl runs.

Brady’s resume speaks for itself. The man has SEVEN rings with two different teams. After parting ways with the Pats, he promptly won a title with the Bucs, proving once and for all that he’s the best to ever play the position.

The case for Belichick is a bit less cut and dry.

Before arriving to New England, Belichick was 36-44 as a head coach in Cleveland. He posted just one winning season with the Browns, but then again, it is the Browns. Can’t hold that against him too much.

With the Patriots gearing up to take on the Packers in Week 4 of the 2022 season, Green Bay quarterback Aaron Rodgers gave his thoughts on the head coach.

Now, Rodgers has already made his ruling on Brady. He called him the GOAT after that 28-3 Super Bowl comeback against the Falcons in 2018.

But it seems Rodgers not ready to pick sides on this Brady/Belichick debate. Instead, he’s saying both are the greatest to ever do their jobs. Here’s what Rodgers had to say in an interview with Pat McAfee Tuesday.

He went on to say he thinks Belichick is hilarious in his press conferences, which I have to disagree with, but the coaching notes are undisputable.

While the head coach is widely considered to be among the greatest ever, fans are still debating whether or not Brady was the reason for his success. And these comments from Rodgers only stirred that pot more.

Check out the immediate reaction online.

He's 100% wrong. Look at Bill without Tom. Mediocre at best.

Another posted, “IDK. It’s sure starting to feel like it was a lot more of Tom’s doing than Bill’s,” after hearing the comments from Rodgers.

Iddddkkkkk. It's sure starting to feel like it was a lot more of Tom's doing than Bill's.

“Has a worse record than Rex Ryan when the greatest QB of all time isn’t playing from him,” said one follower who doubts Belichick’s abilities without Brady under center.

But while many were dismissive of Rodgers’ statement, there were some that would rather take the word of a Super Bowl winning QB that’s faced the head coach head-to-head. “Random person: I know more about football than Aaron Rodgers.”

Random person on twitter: I know more about football than Aaron rodgers 🤡

No matter what Rodgers, or any other player for that matter says, fans will always have their own opinion of that New England Patriots dynasty.