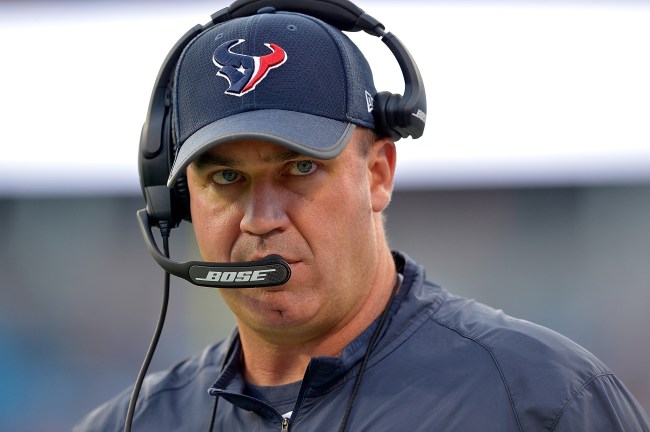 Houston Texans head coach Bill O’Brien finds himself in a real bind, doesn’t he? It was bad enough that the guy traded away his superstar wide receiver, DeAndre Hopkins, for what was described as a “ham sandwich” by Michael Irvin, but now O’Brien’s getting called out for how his breakup with the All-Pro wideout went down, with Irvin claiming Hopkins told him about some questionable behavior by the Texans’ head coach — which reportedly included a comparison to Aaron Hernandez, who was convicted of murder years back.

While Hopkins tried to downplay it all with the tweet below — saying everything’s being blown out of proportion — there’s no denying that Bill O’Brien is taking a major beating in the media today.

Who knows what actually happened between O’Brien and Hopkins, but, if true, the head coach should absolutely face some sort of discipline. You can’t have a guy in a leadership position comparing players to a man like Hernandez to try and make a point, nor be upset about any of his off-the-field decisions that aren’t breaking rules or illegal, as Irvin suggests the Texans head coach did. So we’ll have to wait and see what all comes from these allegations.

As for another one of Bill O’Brien’s former players, Jaelen Strong — who played for the Texans from 2015-17 — is piling on the O’Brien hate train. The former NFL player took to Twitter to really lay into the head coach, claiming he ruined his NFL career, calling him out for his true colors being shown right now, and urging current players to avoid signing with the Texans in free agency. Take a look below at Strong’s proclamations.

This is who Bill O Brien is. Y’all thought it was my fault I wasn’t seeing the field. The man simply didn’t like me because I was a product of my environment. PERFORMANCE means nothing. He wasted my first 3 years ultimately ruining my NFL career. I never knew how to kiss ass 🤷🏾‍♂️ https://t.co/CzLaB3pxPq

He did it to my dawg @D33_foreman too… didn’t back my dawg mumphery when he knew the whole shit was a lie! Long long list trust me… https://t.co/ZMZwX3mPKD

It’s something deeper w this organization…. they care about something else more than they do winning. Just don’t know what https://t.co/KJBCYBjpI0

Everyone’s entitled to their own opinion, and the things Jaelen Strong mentions are super personal, so they should be taken with a grain of salt. After all, it’s easy to kick a guy when he’s down — as O’Brien is right now. However, given the fact the entire league is looking at Bill O’Brien and laughing isn’t a myth, as one NFC coach reportedly did after hearing news about the Hopkins trade, as the tweets below prove.

An NFC coach texted me today. He said when news of the Deandre Hopkins trade hit the coaches' meeting, the entire room burst into laughter.

The text that I got from a personnel guy was, and I quote, "It's good for the rest of the league having O'Brien at GM." https://t.co/nLb6UOAQDW

Just when you thought being a Houston Texans fan was bad after Monday’s shocking trade of DeAndre Hopkins, shit like this comes out making the organization and Bill O’Brien look completely incompetent, proving that it’s, potentially, an even worse situation than one may have first thought. Happy offseason, Texans fans!