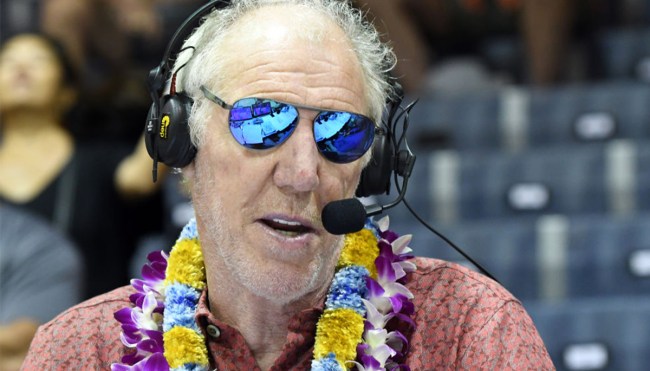 As far as I’m concerned, Bill Walton is the textbook definition of a “national treasure” and a man who must be protected at all costs. While he was no slouch during his time playing basketball at UCLA and in the NBA, he really came into his own after turning his attention to sports broadcasting, where he’s cemented himself as one of the funniest personalities on the planet.

Tuning into a basketball game where Bill Walton is on the mic is sort of like going to an improv show featuring a cast of seasoned comedians: you never really know what you’re going to get, but you can be damn sure you’re going to be entertained—whether it involves him doing his best impression of various animals, going on a lengthy tangent about bridges, or deciding to swallow a lit candle on live television.

On Thursday night, Walton provided commentary during the showdown between Oregon and UCLA, where he and longtime partner Dave Pasch discussed the increasingly controversial transfer portal—or, as the diehard Deadhead prefers to call it, the “Tinder portal.”

Dave Pasch: "You mean the Transfer Portal? You called it the Tinder Portal."

Bill Walton: "Tinder portal, yeah. That's what it is."

Pasch: "You're saying the Transfer Portal is like Tinder? You swipe right or left to get a player?" 🤣🤣🤣🤣 pic.twitter.com/o2vnOfWp8R

Because this is Bill Walton we’re talking about, he was still harping on the transfer portal six minutes after it was initially mentioned, and you have to admit it’s actually a pretty solid (albeit simplified) way to sum up the general concept.

“The way that works is that they put their name in there and then the coaches start pushing left and right.” pic.twitter.com/Ea8GvWJIbz