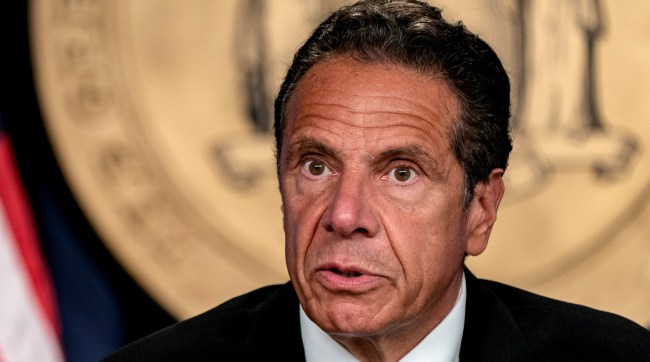 Not only have Buffalo Bills fans created a petition to ban New York’s Emmy Award-winning Governor Andrew Cuomo from attending their upcoming home playoff game against the Indianapolis Colts, thousands have signed it.

Due to the ongoing pandemic, only 6,772 fans will be allowed to attend this Saturday’s playoff game at Bills Stadium due to Governor Cuomo’s declaration last week.

In addition to that, all fans who do attend the game will be required to take a COVID test before the game, at their cost, with contact tracing taking place following the game.

NYS, @NFL and @BuffaloBills have come to an agreement to allow ~6,700 fans to attend the first home playoff game.

The stadium is outdoors. Every fan must test negative before game, wear a mask & social distance.

After finally wresting the AFC East title back from the New England Patriots who won it 18 times over the past 20 years – the Bills’ first division title in 25 years – the team’s owner Terry Pegula is very happy that fans will finally be able to attend a game.

#Bills owner Terry Pegula: "As you know the entire Bills organization missing the energy of the fans at our games. We know we're there but we want them here. We will feel and definitely soak in their support at the game."@news4buffalo #BillsMafia

Not everyone is happy, however, because, well, people.

Bills fan Jeffrey Dorenzo is one of those who is not happy that less than 7,000 fans will be able to attend the 12-3 Bills’ playoff game, so he started a petition to ban Governor Cuomo from attending as well.

So Cuomo is going to attend our playoff game after telling us that we can only attend at less than 10% capacity? If he thinks he has more right to a seat in that stadium over people who have waited over 20 years for this opportunity, then people better be there to protest his entry. This is OUR team! This is OUR home. We don’t want you here.

So far the petition has gathered a rather impressive (as of this writing) 16,844 signatures – many of them VERY angry.

“He is single handedly destroying countless businesses and lives of Western New Yorkers with his unscientific, arbitrary and lawless shutdown orders. It is unbelievably brazen and arrogant for him to think he is welcome here while he simultaneously tramples our constitutional rights and crushes us with his tyrannical mandates. Only way he’s welcome is if he ends all of these lockdown measures immediately and APOLOGIZES,” commented Reader Paul Trinca.

“Born/raised in upstate NY and was a Bills fan. My mother-in-law was murdered in a Rome, NY nusing home by Cuomo’s Covid. Keep him out of “Rich Stadium”…he will bring a curse to your team and does NOT deserve special seating ANYWHERE except prison!” commented Donna Spiker.

Be safe, be smart and most importantly, be loud. #BillsMafia pic.twitter.com/dWtOC9MdBf