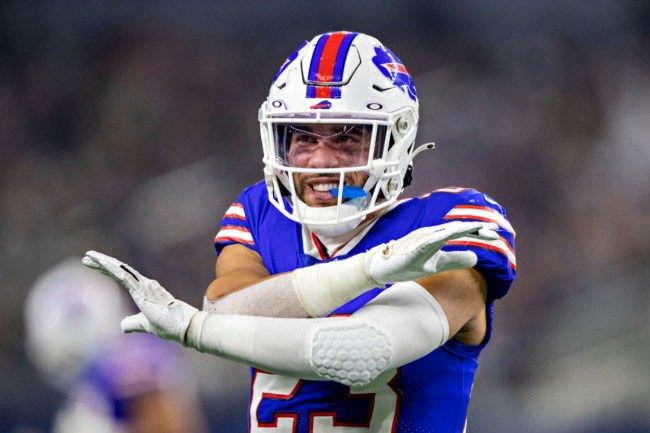 Following the Buffalo Bills’ 14-10 loss to the New England Patriots on Monday night – a game in which the Patriots threw the ball just three times – Buffalo safeties Micah Hyde and Jordan Poyer were asked a very reasonable question.

Jerry Sullivan, a reporter, asked Hyde and Poyer if it was embarrassing to lose in that type of fashion, giving up 212 rushing yards and losing to a team that threw the ball just three times. Again, it was a reasonable question, but Hyde and Poyer didn’t see it that way at all, so they threw a bit of a tantrum.

“I mean, what kind of question is that?” Poyer asked.

Hyde followed up with, “What are we doing bro?”

Hyde also said that he would remember Sullivan’s question while looking like he wanted to get up and possibly fight the man simply doing his job.

Jordan Poyer and Micah Hyde were not happy when asked if they were embarrassed by the run defence tonight. pic.twitter.com/5lwqZ8CRyh

Then, as both players left the press conference, Hyde had one more message for Sullivan.

As Micah Hyde was leaving the podium, he had this to say to WIVB reporter Jerry Sullivan, who asked the question about the Bills run defence. pic.twitter.com/Qigk975fzl

Hyde obviously took Sullivan’s question as an insult about the Bills’ defense and didn’t appreciate him insinuating that they were embarrassed.

Now that the dust has settled, Hyde has since addressed the viral moment. While he didn’t apologize for anything he said, he did make it a point to say he respects everyone in the media.

“Throughout my career, I’ve had the opportunity to meet a lot of you guys, and I don’t see myself as above you guys,” Hyde said on Wednesday, according to the New York Post. “I really treat you guys as friends … The type of relationships I build with you guys aren’t just BS. I really mean it. I respect the s–t out of you guys.

“And then when something like that happens after a game, I expect more. And maybe I’m naive. Maybe I shouldn’t. But I hold you guys to a higher standard just like you guys hold me, and like I said it’s all about respect.”

Hyde also explained that he is, in fact, a sore loser. In his opinion, all winners are sore losers.

Micah Hyde on not being able to string together wins: "Damn right I'm a sore loser. Show me a sore loser and I'm gonna show you a winner. We want to win everybody in this locker room should be a damn sore loser. We're trying to do stuff right, trying to fix our weaknesses." pic.twitter.com/AU1i7d2APe