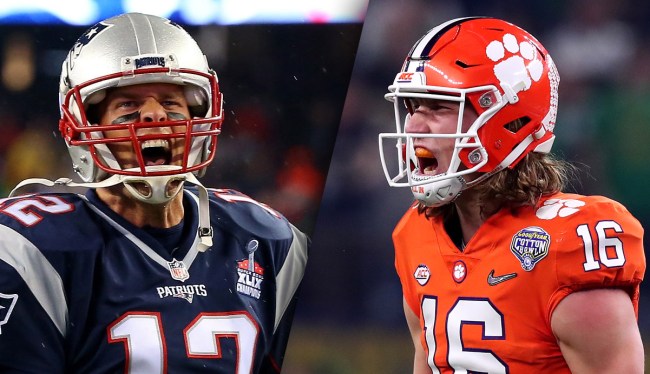 #TankForTrevor? One sports writer for the Boston Herald, Bill Speros, thinks that is something the New England Patriots should really consider doing in 2020 – tank next season so they can draft Clemson quarterback Trevor Lawrence.

Let’s hear him out and see if his logic makes any sense.

First off, he prefaces this idea of tanking for Trevor by saying he only believes it’s the right thing to do if Tom Brady ends up leaving the Patriots, which at this point, based on reports, seems like a pretty decent bet.

If the Patriots are not going to contend for a Super Bowl with Brady as their QB next season, the worst possible scenario would be contending for a playoff spot with some stiff like [Philip] Rivers or [Andy] Dalton as their QB. We had another one-and-done this season. They are not fun.

The NFL is anchored in mediocrity. The salary cap and draft exist in part to help bad teams get better and prevent good teams from staying that way. That structure makes the Patriots Score of Supremacy all the more incredible.

No one wants mediocrity in Foxboro. With just one putrid season, the Patriots could position themselves to get a franchise QB in Lawrence who could lead them through another dynastic decade.

Is Trevor Lawrence really the next Tom Brady? Maybe. Maybe not. Lawrence certainly has had a better collegiate football career than TB12, but we know that often doesn’t mean much when a QB reaches the NFL.

Speros does offer up another option for New England: just sign Brady to a two-year, $50 million-guaranteed contract and make another run at a Super Bowl.

What do you think? Would Patriots fans, who have been accustomed to being the favorites in the AFC for almost two decades, be willing to put up with one terrible losing season in order to land a blue-chip quarterback? And would the team even consider doing it? My guess is the answer to both would be no, but stranger things have happened… like the Miami Dolphins winning five games this season.