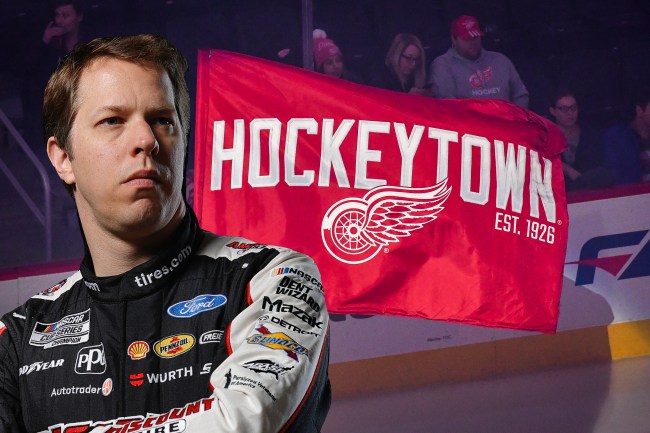 There are very few franchises in professional sports that are as ingrained in the very fabric of their respective cities as the Detroit Red Wings.

Spin the wheel and take your pick as to why: The team’s Original 6 legacy. 11 Stanley Cups. Gordie Howe, Steve Yzerman, Sergei Fedorov, Red Kelly, Chris Chelios, and countless other legends who donned the red and white. Journey’s Don’t Stop Believin’ bellowing through Little Ceasar’s Arena. The iconic winged-wheel logo that makes up some of the best uniforms in sports. A literal trademark on the phrase Hockeytown. The Legend of the Octopus. My fingers are getting tired.

Brad Keselowski—NASCAR star and the pride of Rochester Hills, Michigan—grew up idolizing Gordie Howe’s Detroit Red Wings after becoming swept up by the unmatched energy of the old Joe Louis Arena.

The Team Penske driver joined NHL’s Celebrity Wrap to discuss growing up a Wings fan and why hockey in Detroit just hits different.

“Being a kid or a teenager in those formative years when Detroit hockey, if they didn’t win a Stanley Cup, it was a failure. That’s how every season was. Detroit was Hockeytown. It was the one thing we had. It’s such a blue collar sport in a blue collar town that I think you’ll see that for a long, long time.”

NASCAR driver Brad Keselowski rides the zamboni at the Red Wings game ahead of the Daytona 500. pic.twitter.com/TFTYWThAOf

When asked about his admiration for Gordie Howe, who spent 25 seasons with the Red Wings and is often considered the most complete player to ever play the game, Brad said this:

“He lived close by to me, in the northern suburbs of Detroit. I never met him, but a number of my friends did. They would see him out and about in the town. And he was a legend.

‘Yeah I was at dinner last night and Gordie Howe was there.’

‘No way, what was it like? Did you talk to him? Did you get his autograph?’

I wish I would have had the chance to meet him. He was Mr. Hockey. I remember kids’ lockers would have pictures of him with no helmet playing hockey. He was a badass. There’s no way to get around it.”

Brad, you aren’t the only one who idolized Mr. Hockey. This clip still gives me chills and I’m a Bruins fan.

It's Gordie Howe's Birthday today. And this is how pretty much every hockey fan should feel about him. Hope you're resting well #9. #LGRW

1979-80 All Star Game at the newly opened Joe Louis Arena in Detroit. pic.twitter.com/fgnebdHvWF

Christian Cage Recalls Making An Improbable Save On NHL’s Doug Gilmour In A Scrimmage, & How Doug Came Back With A Vengeance