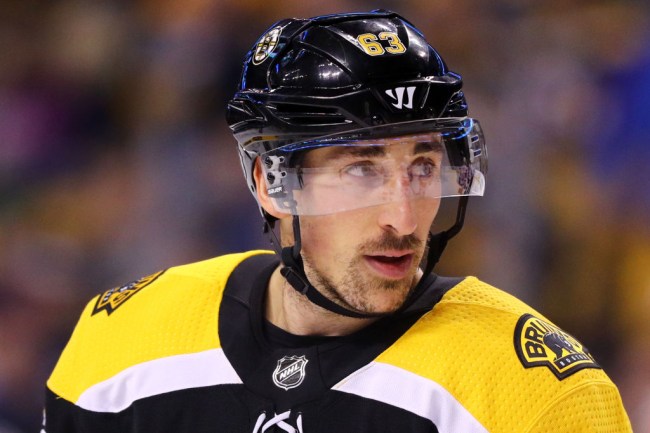 Brad Marchand is one of those players who is almost universally hated by everyone except the fans of the team he plays for but who would be welcomed with open arms by even his biggest haters if he ever ended up playing for their franchise of choice.

The animosity is entirely warranted, as Marchand has a long history of questionable hits that led to him earning a reputation as a dirty player. However, he’s managed to clean up his act a fair amount over the past couple of seasons aside from the instances where he licked some opponents before the NHL asked him to stop.

Even if you despise Marchand, it’s hard to argue he’s not incredibly effective when it comes to going into Pest Mode and getting under the skin of his opponents, and for all his faults, he’s a damn good hockey player who produces on an impressively consistent basis.

One of his most valuable assets is his truly absurd ability to handle the puck, and as a Bruins fan, I’m consistently amazed at his penchant to make defenders look absolutely silly as he expertly maneuvers around the ice like he did during one of the best penalty kills I’ve seen in recent memory.

However, it appears the Monstars recently returned to Earth to give hockey a whirl and successfully got Marchand to touch a puck capable of sucking his powers away, as that’s the only real explanation I can come up with for the brutal week he’s had.

On Monday, the Bruins and the Flyers headed to a shootout to decide their game and it was essentially a foregone conclusion that Philadelphia was going to come away with the victory based on how truly atrocious Boston has been when they’re unable to win in overtime.

The Bs needed a goal in the fifth round if they wanted to extend the contest and Marchand got the call only to blow the opportunity in an almost unprecedented fashion by lightly grazing the puck, which moved approximately two inches before coming to a stop.

Marchand was voted both the best and worst trash-talker in the NHL last year by his fellow players and he hopped on Twitter to remind the world his flub didn’t cancel out the fact he won a Stanley Cup in addition to firing back at a fan who tried to insult him.

Your shootout is in your driveway not the NHL peasant. You pretend to be me in your back yard dream big bud

On Thursday, Marchand had the opportunity to redeem himself after he had another chance to net an uncontested shot when he found himself alone on a breakaway only to spectacularly blow it yet again.

He ended up getting a goal when everything was said and done by putting the game away with an empty-netter, and on Friday morning, he made light of his recent struggles by firing a chirp in his own direction.

ATTENTION…hands have been lost or stolen, if found please return to TD Garden…thanks

Marchand has a couple of days to recover from his current case of the yips before the Bruins face off against the Penguins again on Sunday, but much like Greg had to deal with people constantly reminding him of the time he pissed his pants in Superbad, hockey fans certainly aren’t going to forget these moments.