Brandon Marshall Takes Multiples Digs At Baker Mayfield, Says He Wouldn’t Want To Play With Him Because His Lack Of Accolades 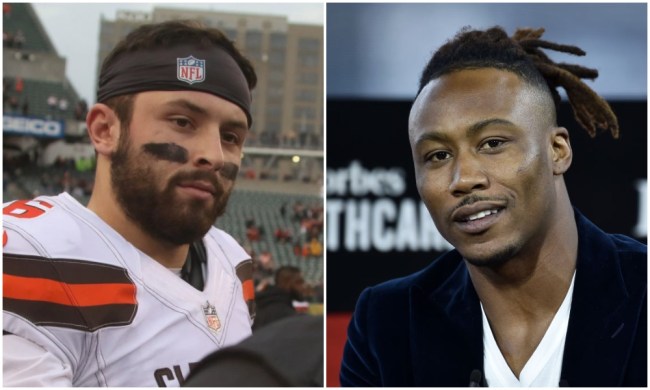 Baker Mayfield’s NFL career has been about as consistent as the weather. Mayfield’s time in Cleveland has been a rollercoaster since being drafted first-overall by the Browns in the 2018 NFL Draft. He had a solid rookie campaign, took a giant step backward a year ago, and now this season seems to have found his stride again over the last handful of games.

Mayfield has the Browns rolling at the moment as they’ve won their last four games to put their record at 9-3 on the year. He’s thrown six touchdowns and zero interceptions while completing almost 64% of his passes during that stretch.

Four-game winning streaks certainly don’t make a player’s career, but there’s no denying that people, even Colin Cowherd, are starting to come around on Mayfield and his abilities as an NFL quarterback. Former NFL wideout Brandon Marshall isn’t one of those people, however, he’s not a fan of the former Oklahoma standout, to put it lightly.

“I don’t know Baker. I never met Baker. I don’t like his game, I wouldn’t want to play with him,” Marshall said on the ‘I Am Athlete’ podcast. “Until you prove it to me, don’t be doing the talk… these players now, they make with the fame before the game.

Marshall admits he doesn’t know Mayfield at all, but his antics are just too much for him to handle apparently. I’m not sure what that exactly means from a former NFL wide receiver, arguably the most outspoken and show-boaty position group in sports, but okay. According to Marshall, Mayfield needs an accolade not called the Heisman Trophy in order to talk the talk.

Marshall has him on the Pro Bowl front, he was selected to six Pro Bowls throughout his career, but his first didn’t come until his third season in the league when he was with the Broncos. The winning a Super Bowl dig is an interesting one seeing as how Marshall never won a ring during his career, in fact, he never played in a single playoff game.

Marshall is 100% entitled to his opinion, but he’s also the guy that back in April that said the Saints were ‘done’ and prior to Freddie Kitchens being fired by the Browns last year tried to explain that the team shouldn’t let him go.

Marshall is not batting .1000 in the ol’ hot takes department since hanging up the cleats.