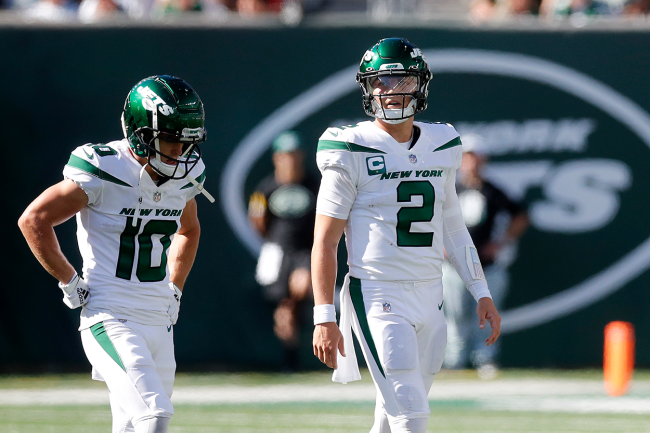 When you couple the two things together, it makes Braxton Berrios’ most recent comments about his quarterback rather funny.

On Sunday morning, a photo of Wilson’s ex-girlfriend and Wilson’s best friend and roommate at BYU made waves online. They appeared to be rather intimate with one another, leading to the assumption that Wilson’s ex is now dating Wilson’s (likely former) best friend.

When Wilson’s ex-girlfriend was accused of being a ‘Homie Hopper,’ she appeared to clap back at the commenter. A screenshot appears to show her accusing Wilson of “sleeping with his moms best friend.”

True or not, the accusation about Wilson and his “moms best friend” makes Berrios’ comments about the Jets quarterback very funny.

During a recent appearance on The Adam Schefter Podcast, Berrios said that Wilson is in “a different world” after what was a “whirlwind” beginning to his NFL career. The former BYU quarterback had to learn a new offense, get to know his teammates, and acclimate to a much more complicated game.

All of that is normal and nothing out of the out of the ordinary. What Berrios said next, however, is coincidentally comical.

“Everything is there from a physical standpoint, and now everything from his mental [standpoint] has aged so much since just a year ago that I can’t wait, again I hate talking about it, I hate hype — I can’t stand it, but I can’t wait to see him Week 1 and see what he can do because he’s in a different place than he was last year.”

Berrios’ description was not intentionally attached to Wilson’s off-field rumors. However, for him to use the words “aged so much,” is hilarious.

A year ago, Wilson was dating his college girlfriend. They have since broken up and scrubbed each other from their social media profiles.

She now appears to be claiming that he slept with his “moms best friend,” who would likely be around the age of 45 like his 48-year-old mother. And now Berrios is saying that Wilson “aged so much” during that same timeframe. Incredible timing for those two things to coincide.