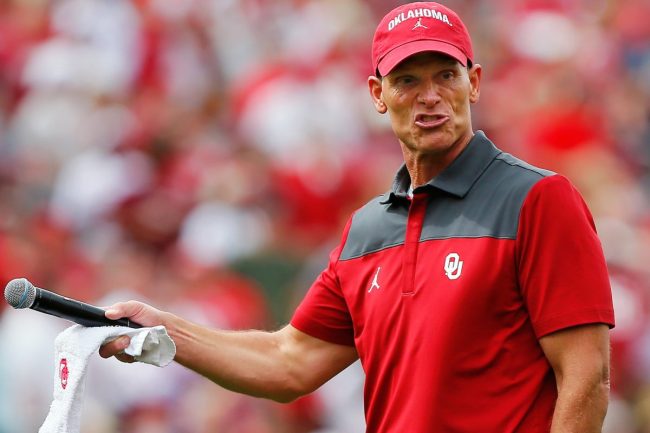 Brent Venables is becoming the butt of jokes after accidentally making a lewd metaphor at the Big XII Media Days.

The Oklahoma head coach came on to speak about his first offseason with the Sooners and the outlook of the program for the upcoming campaign. When asked about the learning curve in his first year as a head coach, Venables made an interesting reference.

“The firehose is fully inserted in my mouth here. We've been blowing and going." – Brett Venables, 2022 pic.twitter.com/3WUcH8EZlM

“The firehose is fully inserted in my mouth here. We’ve been blowing and going.”

He compares the experience to a firehose, having to gather a plethora of information in a small amount of time. I’m not sure why the firehose was in his mouth, though. The hand gesture makes it that much better.

Fans were quick to react to the hilarious metaphor on social media.

Fans were quick to comment on Brent Venables’ firehose metaphor at Big XII Media Days. The immediate reaction on social media was great.

We can’t really make a joke better than the actual quote here. https://t.co/T7Ui73JTmK

It’s not the first time that fans have had a laugh at the Oklahoma program under their new head coach. The team’s motto was in question this offseason, too.

Oklahoma’s offseason motto for the 2022 campaign is “Dirty Hard Work Done In The Dark.”

Again, while the meaning behind the quote (work while no one’s watching) is fair, the presentation is lacking. Rival schools had some fun with the motto.

Still trying to decipher what this means https://t.co/NsZMQL8cQq

The offseason in Norman is the gift that keeps giving.