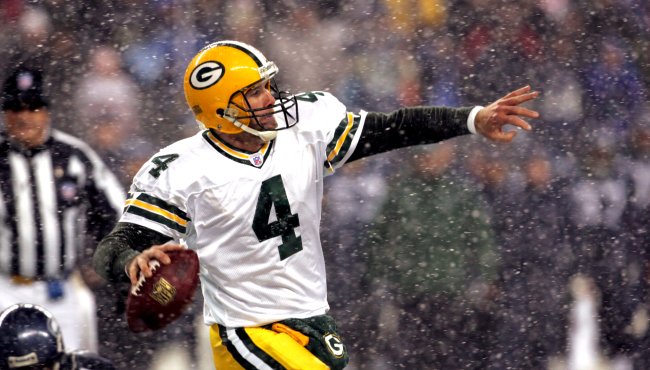 Hall of Fame quarterback turned hot take machine Brett Favre had a rather surprising admission this week. He wishes the NFL had switched to a 17 game regular season schedule like they are in 2021 back when he was still playing.

Favre’s opinion about the 17 game NFL schedule stands in stark contrast to the feelings of numerous current NFL players.

Honestly it would be nice as a running back before they agree to 17 games if they asked us what we thought. Just saying🤷🏽‍♂️

Related: Brett Favre Says Athletes Like Naomi Osaka Should Talk To The Media ‘Because Of The Money We Make’

Speaking about the NFL schedule change on Wednesday on SiriusXM NFL Radio (via ProFootballTalk.com), Favre said, “I just wish that it would have happened while I was playing. I would much rather play an extra regular season game or two or three than pre-season.

“You know, I’ve said this my whole career. I’d much rather practice, study, do all the things you have to do, and at the end of the week play for real, versus maybe not even playing as some do during pre-season. I think [the 17 game schedule] is a really good thing. I just wish it would have happened while I was playing.”

Favre also admitted that he hated the NFL bye weeks.

“I hated bye week because it meant I wasn’t playing, you know? Maybe I was cut from a different cloth, but I just loved to play and adding an extra week, eliminating a bye week, I would have been gung-ho for it.

“Owners, coaches, players are going to bellyache that we need the bye week and you know, I can see their their point.”

In his conversation this week on NFL Radio, Brett Favre also, once again, discussed the situation in Green Bay between the Packers’ front office and Aaron Rodgers.

“What I sensed in our conversations was frustration on his part in regards to retaining players, or letting guys go that he felt like were very instrumental in their success,” said Favre. “And was not given any heads up on either bringing someone back or letting someone go.

“Now that being said, that happened to me numerous times. You know, you lose a guy that you become really good friends with. Maybe it’s a receiver that you had a rapport with that you feel like you’ll never get with anyone else and he showed no signs of declining and it was like a no-brainer, bring the guy back. But that’s the way it was.”

“I do think this in regards to Aaron, but also let’s say Tom Brady, Russell Wilson, guys who’ve paid their dues and certainly should be listened to when, you know, let’s just use Aaron as an example,” said Favre. “If he goes in and says, ‘Look, I really think we need to keep this guy. I really love the rapport I have with him. I trust everything he does on the field and that’s hard to come by. Let’s retain the guy, whatever it takes. Let’s do that.’ I think that’s justifiable, for Aaron to speak up or any guy who’s paid his dues. And I think it would be unwise as an organization to not listen to the guy who’s pulling the trigger.

“You know, your take from a general manager perspective obviously is different because you’re thinking about the team as a whole, but also the future and the present. So yeah, I certainly think that that’s a tough job, but the guy that’s pulling the trigger for you deserves to be listened to and in some cases, you act on his wishes. So I think that’s what we’re going to see happen from now on.”