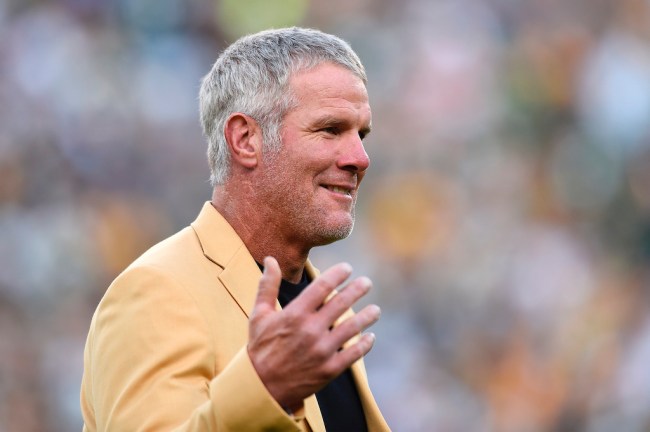 NFL Hall of Famer Brett Favre had an interesting question for President Donald Trump during a recent Town Hall style Q&A, wondering how players in pro sports leagues like the NBA, NFL and MLB, among others, can support political issues without being alienated. As we all know, ratings for the NBA Finals were down enormously year-over-year, and the NFL has seen a decrease in viewership as well, per the New York Times.

Although pro athletes get paid millions of dollars to play a sport — something pretty much everyone is envious of, with some people believing that it’s all athletes should stick to doing — that whole First Amendment thing allows something called “Freedom of Speech,” giving athletes the same rights as crazy Karen’s who go viral for voicing their opinions about mask-shaming and such. Just saying.

According to the Washington Post, Brett Favre was an audience member on the Sinclair Broadcast Group’s “America This Week,” and submitted the question via video to Trump regarding politics in sports.

“The NBA and the NFL are struggling with lower ratings, as fans clearly do not want political messaging mixed with their sports.” Favre followed that claim by asking: “So how should the leagues support and promote an anti-racism position without becoming political and alienating fans?”

Favre, who has shown support for Colin Kaepernick after NFL teams (seemingly) blackballed the former quarterback for protesting police brutality years ago, wonders if the political messaging in some leagues are turning fans away. Here’s how Trump responded.

“People don’t want to see all of the politics. They’ve got enough politics, with me and with everybody else. And they don’t want to see it with football or sports, on Sunday or whenever they happen to be watching.”

“I think that football ought to get back to football and basketball to basketball,” he declared. “And let politics remain separate.”

“If people want to protest, they can. But they shouldn’t be protesting on the sidelines during the football game, especially when they are making $10 million a year for something that they’d be doing anyway, for free, if they weren’t in the NFL or in the NBA,” he continued.

It’s an interesting dilemma that pro sports leagues are wrestling with, and one that NBA Commissioner Adam Silver has already discussed as his league prepares for the 2020-21 season, with Silver already saying that social justice messaging will not be part of the league next year. The NFL added social justice messages in the back of end zones, while also allowing players to wear decals on their helmets to peacefully voice their opinions. But, unfortunately, fans may be turned off from it all.

There’s no right answer to Brett Favre’s question about politics in sports. As the election nears, there are tons of hot button issues that are constantly being addressed, so we’ll have to see how things play out over the next few months.