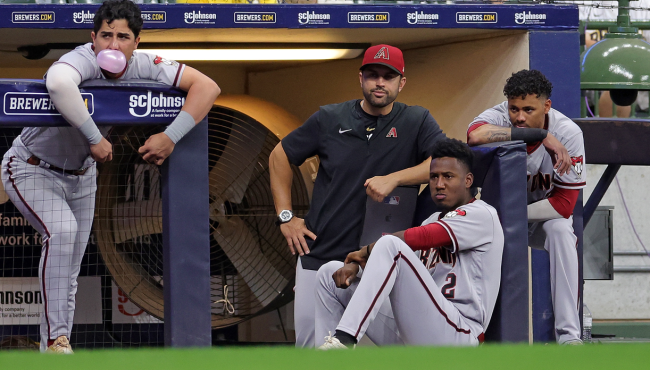 As we have seen time and time again over decades of baseball games, fans will often go to ridiculous lengths in an attempt to gain possession of a ball.

Some of these daring attempts are almost justified, such as when a fan dangerously leaped over a railing in a failed attempt to retrieve Aaron Judge’s 62nd home run ball.

In most cases, however, it’s just not worth it to go balls out trying to get something as simple as a baseball. The price for doing so, as we have seen repeatedly over the years, is usually far too high.

The best route to getting a baseball at a game is to just mind your own business and if it happens it happens.

This is a lesson one of the few fans in attendance at the Milwaukee Brewers’ final game of the 2022 season learned the hard way.

At one point during Milwaukee’s game against the Arizona Diamondbacks Wednesday night, a fan wearing a Brewers jersey thought he saw a golden opportunity to score himself a foul ball.

The only problem was that the ball wasn’t going to land in his row.

His solution? Dive over two rows of seats and try to catch the ball on the fly.

A Brewers fan risked it all, diving over two rows of seats, in an attempt to catch a foul ball

Not only did the Brewers fan not get the baseball, he probably woke up this morning with, at the very least, a set of seriously bruised ribs.

The announcer’s reaction, however, was priceless.

Really leaving it all out there on the last day of the season. pic.twitter.com/gUGI0EvOFW

As were the many reactions on social media.

“My man sacrificed his life for a foul ball,” one fan wrote on Twitter.

“And that’s how daddy broke his ribs. “

“Bro deserves a team autographed bat for that kind of commitment,” another wrote.

God I felt that in my ribs

“Gonna be feeling that for 6 weeks…” another fan commented.

Speaking of that, just to add insult to injury for the fan, the Brewers, who led the National League Central for a big chunk of the season only to not even earn a Wild Card spot after being eliminated on Monday, ended up losing to the Diamondbacks 4 to 2.

Perhaps trading away closer Josh Hader while the team was in first place was a bad idea.