Brian Kelly Slights Notre Dame, Says He Needed To Be In ‘Environment To Win A National Championship’ 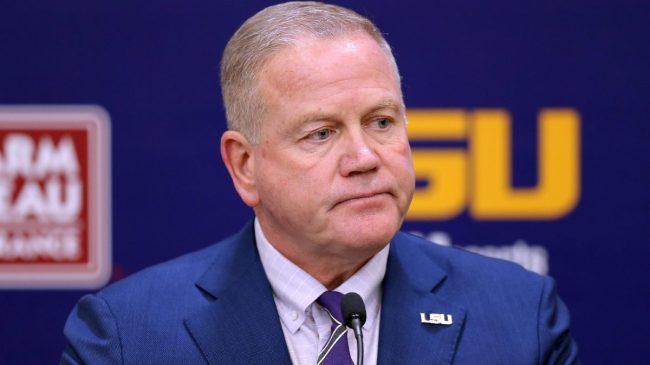 Brian Kelly made a surprising move this past offseason.

The longtime Notre Dame head coach opted to travel down south, accepting a role with LSU. The Tigers had recently moved on from Ed Orgeron, leaving a vacancy in the SEC.

Kelly, who hadn’t even completed his season with the Irish, made a quick flight down to Baton Rouge and signed the papers before anyone knew what hit them. Things moved so quickly that the former Irish coach had actually been recruiting for his old team when he found out he was LSU bound.

As expected, things didn’t sit right with Notre Dame. That feeling grew even stronger with the way Kelly hightailed it out of town, hardly saying two words to his former players. It was almost as if he disappeared in the middle of the night, which was odd considering his team was still in College Football Playoff consideration at the time.

But Kelly didn’t seem to mind. Before you knew it, he was out awkwardly recruiting players for his new team while developing a southern accent in the process.

Now, the former Irish leader has given his reasoning behind the move to Baton Rouge. Something tells me Notre Dame won’t like this explanation, either.

Brian Kelly on leaving the Fighting Irish for LSU: “I want to be in an environment where I have the resources to win a national championship. And I came down here because I want to be in the American League East.”

Kelly says he wanted to be in an environment where he could “win a national championship.” He may be forgetting that his Irish played in a title game in 2012. They’ve also made a pair of CFP appearances.

He compares his new gig to being in the American League East, as he’ll now have to compete with programs like Alabama, Auburn, Texas A&M, and Florida on the annual schedule.

Kelly also goes on to say that LSU presents him with an opportunity to spend less time recruiting, which might not be a key to success in the uber-competitive SEC.

Also interesting in here is Kelly’s perspective on recruiting at LSU. Says he won’t need to put in as many hours recruiting in Louisiana compared to Notre Dame’s national profile.

When all was said and done, Kelly believed that he’d done everything that he could in South Bend. We’ll see if LSU offers an opportunity to bring home a title.