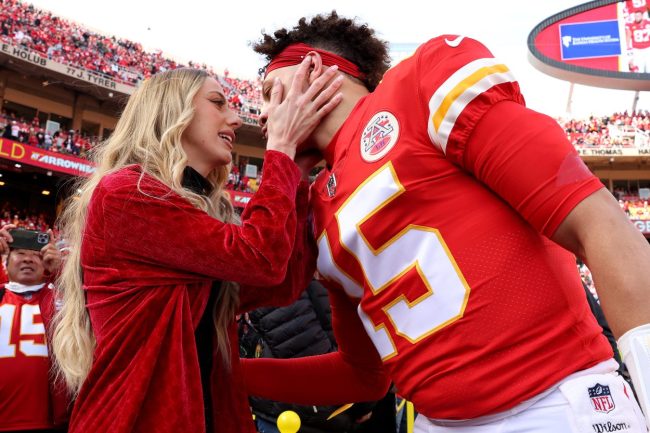 She and Mahomes’ brother Jackson have made themselves the most insufferable family in sports. The timeline of how they got to that point is remarkable because they don’t ever do themselves any favors.

That was certainly the case last weekend.

After the Chiefs won their AFC Divisional Round game against the Bills in overtime, Matthews popped a bottle of champagne.

Instead of just pouring herself a glass and cheers-ing with her friends, she opened the window to her box suite and sprayed the bubbly liquid all over Kansas City fans below. It was very cold at the game and Matthews’ champagne spray caused quite a bit of controversy.

NFL fans wanted her to be banned from games moving forward. Matthews responded to the backlash and ultimately asked for people to leave her alone, despite the fact that she brings it upon herself.

And then she proceeded to try and capitalize on the buzz by selling merchandise for her supporters.

On Sunday, prior to the AFC Championship game, Matthews was back in Arrowhead Stadium. Seven days after spraying champagne on fans in the lower deck and causing a ripple across the internet, she shared a video from the game that showed the Kansas City fans below clamoring for more champagne.

It was essentially a middle finger to the haters. However, she forgot that those people are Chiefs fans and that they will root for her through anything because they want her fiancée to win football games.