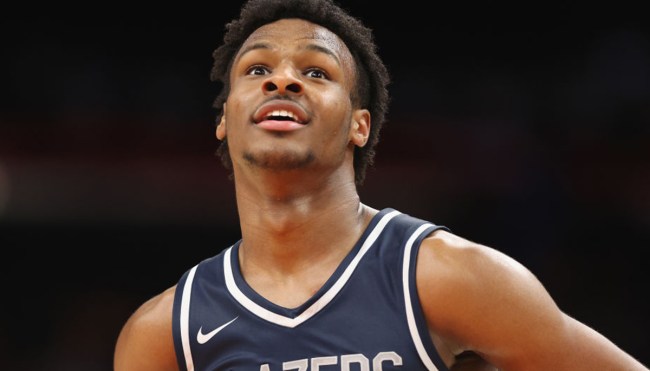 It should come as no surprise that plenty of professional athletes have kids who’ve decided to follow in their footsteps, and while more than a few have managed to carry on their family’s legacy, the fairly daunting expectations that come with picking that path can make it hard to escape your parent’s shadow.

That’s especially true when your dad is a generational basketball talent and one of the rare prospects who was able to transcend the infinite amount of hype that surrounded them when they were still in high school, which is the situation Bronny James has found himself in as the son of LeBron.

It’s hard to imagine the younger James will be able to rival the mark his father has managed to leave on the NBA, but it’s safe to say the 17-year-old has shown a ton of promise as he continues to hone his impressive set of skills in high school (and does so while expertly dealing what the pressures that come with being the son of the Ultimate Basketball Dad).

Bronny is slated to graduate in 2023 and is currently considered one of the top 50 prospects in that class, and he’ll have more eyes on him than ever as he gradually reaches a point where he’ll be able to take his game to the next level. While LeBron has teased the possibility of playing with him in the NBA, his son will have to keep himself occupied for at least a year after earning his degree before making the leap, and we now have an idea of where he might choose to do so courtesy of 247Sports.

According to Bronny’s profile, the sophomore is currently interested in playing for one of four college basketball powerhouses: Duke, Kansas, Kentucky, and North Carolina (according to ESPN, he technically already has an offer to play for John Calipari, but it’s worth noting he allegedly received the invitation at the age of two).

Bronny still has plenty of time to go, so while there’s a good chance this could change in the coming years, something tells me that’s not going to stop people from speculating way too much.