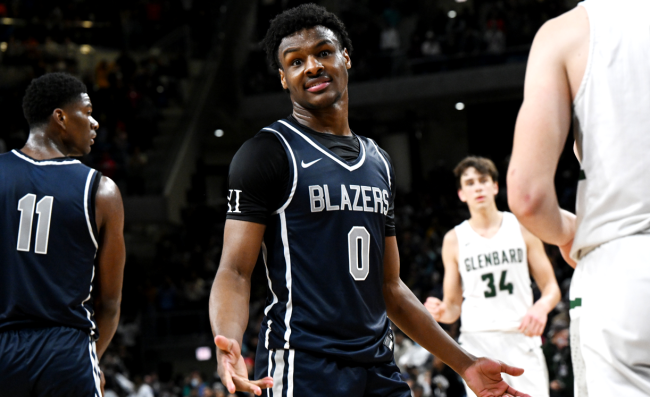 As if he really needed the money with his dad LeBron James worth somewhere in the neighborhood of $1 billion, 18-year-old Bronny James just signed another high-profile NIL deal.

The 6-3 guard from Sierra Canyon High School will become the latest brand ambassador for Beats by Dre. He becomes the company’s first high school NIL signing.

Bronny and his dad appear in a new commercial for the company titled “King of the Court: LeBron James’ Legacy Continues with Bronny.”

“The Chosen One vs. The Chosen Son,” the company tweeted along with the video.

Back in 2008, his dad LeBron was the first athlete to sign as a brand ambassador with the Beats by Dre.

Congrats to Bronny but maaaaan.

The rich get richer.

All because of his dad, so much better players in the country that are busting for a athletic scholarship, NIL deals and growing up in poverty, yet he gets handed the deal.

Bronny James adding Beats by Dre to his recent Nike deal, movies him past Arch Manning on the highest paid NIL list

Last week, Nike announced it had signed Bronny James to an NIL deal along with Caitlin Clark of Iowa, Haley Jones of Stanford, high schooler DJ Wagner from Camden, as well as James’ teammate at Sierra Canyon, JuJu Watkins.

Hit that ❤️ to show them some love and welcome them to the Nike Basketball fam. pic.twitter.com/xIPZN2raOS

“For as long as I can remember, Nike’s been a part of my family,” Bronny said in a statement. “Getting a chance to team up with them and continue my family’s legacy both on the court and in the community is wild — it really means a lot to me.”

The junior James also has a NIL deal with PSD Underwear and according to On3, now has a NIL portfolio worth $7.4 million.

He is ranked number one overall in On3’s NIL rankings ahead of Arch Manning at $3.4 million, Ohio State’s CJ Stroud and Alabama’s Bryce Young at $2.6 million, and LSU gymnast Olivia Dunn at $2.4 million.