The Brooklyn Nets May Be The One NBA Team Ballsy Enough To Sign Carmelo Anthony, Per Report 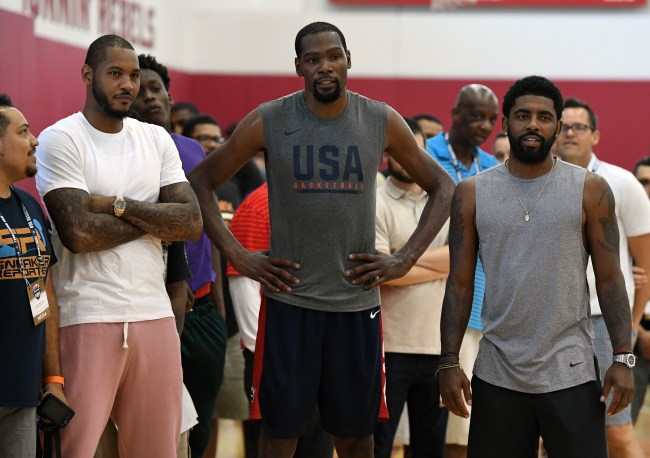 The Brooklyn Nets had one helluva offseason. They didn’t just sign superstars Kevin Durant and Kyrie Irving to add to a team that, unexpectedly, overachieved and reached the playoffs last year, but they also locked up two other key contributors in the process, Caris LeVert and Spencer Dinwiddie, giving the team a formidable roster heading into the upcoming season.

On paper, the Brooklyn Nets have to be considered one of the top contenders in the Eastern Conference — even with the uncertain status of Durant following Achilles surgery. And, while the team seems ready to go as training camps are set to open soon, there’s a rumor that the front office isn’t quite done adding talent to the team.

And one of the names reportedly being floated out there is Carmelo Anthony, who has all but been blackballed by the league after his recent failed stints with both the Oklahoma City Thunder and Houston Rockets the past couple years.

Kyrie Irving and Kevin Durant could be the keys to Carmelo landing in Brooklyn. (And Wilson Chandler’s uncertain status doesn’t hurt either.) https://t.co/4CUUksuX0A

The report comes from The Athletic‘s Frank Isola, who adds that Melo to the Nets could happen because, quite frankly, both Irving and Durant are “pushing” for it. With the three having a relationship from their time playing for Team USA over the years, apparently, the two All-Stars see Anthony as a possible addition to a squad with championship aspirations. And, from ESPN’s Adrian Wojnarowski, although the Brooklyn Nets already have 15 players with guaranteed contracts, small forward Wilson Chandler is suspended for the first 25 games for PED use, meaning there could be a spot for another player.

Brooklyn Nets forward Wilson Chandler is facing a 25 game suspension for testing positive for PED use, league sources tell ESPN. The NBA is expected to make an announcement later today.

Well, what do you know, a guy who happens to play Carmelo Anthony’s same position, Chandler, won’t be available for about one-third of the NBA season, and Irving and Durant just so happen to think their good buddy could vill that void. This is interesting, isn’t it?

Isola’s report about Melo joining the Brooklyn Nets includes details about the team’s front office leaders already seeing him recently workout, as well as rumors that the 10-time All-Star has been linked to rejoining the New York Knicks, too.

Per SLAM, via The Athletic report:

According to Isola, both Nets general manager Sean Marks and head coach Kenny Atkinson have seen Anthony play or work out so far this summer. Marks, of course, will get the final say on whether the team adds the veteran to the official lineup.

Isola’s report comes the same day as Anthony is scheduled to scrimmage with Brooklyn’s cross-town rival, the New York Knicks.

At 35 years old, who knows what Carmelo Anthony has left in the tank, or what he can bring to an NBA team. Long gone are the days of the mid-range jumper — which he specializes in — and stagnant, iso offense. Plus, would Anthony be open to coming off the bench or taking a lesser role with either the Brooklyn Nets or any other team in the league? He hasn’t shown willingness to do so in the past, so, even with the push from Kyrie Irving and Kevin Durant to try and make this happen, it could still be a long shot.