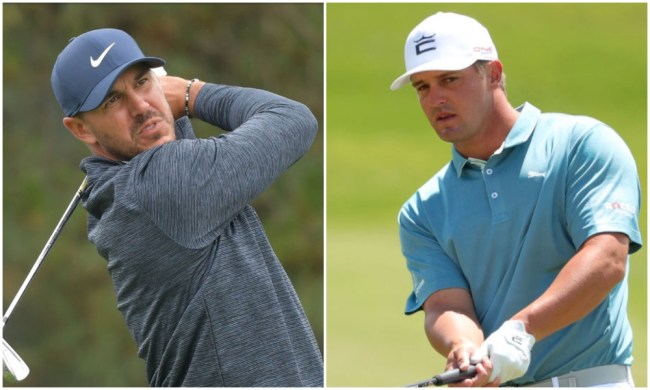 While there are plenty of intriguing storylines to follow with the 2021 Open Championship underway at Royal St. George’s, the British tabloids are most invested with the Bryson DeChambeau – Brooks Koepka rivalry.

The tabloids over in Europe make the tabloids we read while standing in line at the grocery store here in the United States look like the Associated Press, so it isn’t surprising to see the Brits on top of the Koepka – DeChambeau drama. You can’t blame the tabloids, either, it’s without question the most intriguing story to follow in golf.

One particular tabloid came up with a brilliant headline: ‘Beef Sandwich.’

The Open is taking place in Sandwich, Kent, England this week at Royal St. George’s. Plus, with Koepka and DeChambeau easily being the two biggest beefcakes in the game, the headline is perfectly spot-on.

There was a bit of drama in the media center heading into this week’s Open as well.

One reporter called DeChambeau “Brooks” before asking him a question. On Koepka’s side of things, he was asked about the upcoming Ryder Cup and how all of the drama may be handled with the two being teammates representing the United States this Fall.

“It’s only a week,” the World No. 8 said. “I mean, look, I can put it aside for business. If we’re going to be on the same team, I can deal with anybody in the world for a week.

“I’m not playing with him. I’m pretty sure we’re not going to be paired together, put it that way. I think it’s kind of obvious. It doesn’t matter. I don’t think they’re—we’re not going to be high-fiving and having late-night conversations. I do my thing, he does his thing.

Both Koepka and DeChambeau got off to decent starts in round one of The Open shooting 1-under and 1-over, respectively.