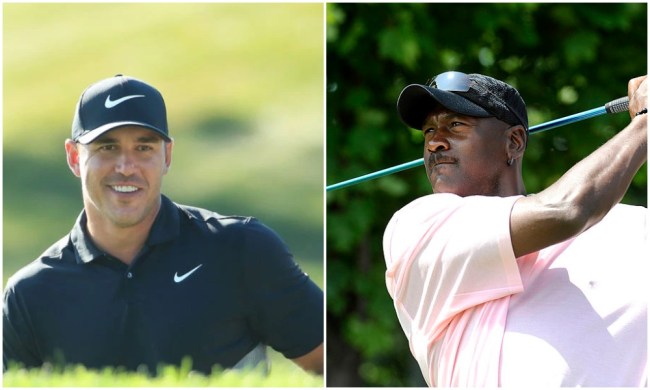 Not only has ‘The Last Dance‘ given us some great behind the scenes action of Michael Jordan’s final season with the Bulls, but it’s also given us a look into MJ’s love for the game of golf. Those scenes of him playing golf and undoubtedly gambling on himself show a different competitive side of Jordan and it turns out that Brooks Koepka caught a glimpse of it first hand.

The No. 3 player in the world joined The Dan Patrick Show on Tuesday and talked about the time he teed it up with Jordan about four or five years ago. Koepka, who held a one-shot advantage with two holes to play, explained that there was some smack talk going around all day and it all came to a head on the 17th tee.

“We were walking onto 17 tee and I’m giving him shots on 17 and 18. I forget what I said, I said something to him,” Koepka explained. “He tees the ball up, he takes a practice swing, and he goes, ‘It’s the fourth quarter, baby, I don’t lose.'”

“This is the MJ I remember,” Koepka recalled.

Well, in typical MJ fashion, he flipped a switch and won the final two holes to take the match. There was, of course, some money on the line as well and Jordan was quick to remind Koepka about it.

“Obviously he goes on to win 17,” Koepka said. “Then he just kind of looked at me on 18 tee, and on 18 green I remember he shook my hand and wanted to know where my wallet was at.”

Koepka pointed out that he hasn’t played MJ since, but is hoping they get to tee it up again soon.

You would imagine that the Koepka of today has just a bit more confidence than the Koepka of four or five years ago thanks to the four majors he’s won since.

Then again, we’re talking about going head-to-head with Michael Jordan, it’s probably intimidating as hell to play the man in rock-paper-scissors.