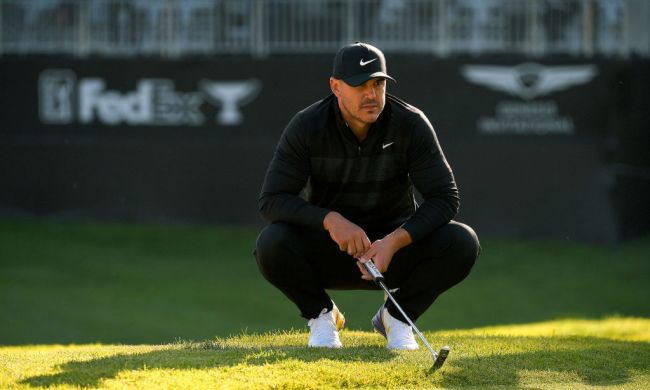 Brooks Koepka isn’t one to show too much emotion out on the golf course. The four-time major winner has a certain demeanor about him always appearing to be cool, calm, and collected no matter the situation. In high-pressure situations, he operates more like a machine than a human, which has been a major key to his success.

But, at the end of the day, Koepka gets frustrated just like the rest of us, and after a frustrating 2020 season battling injuries, he quite literally snapped.

Koepka missed three consecutive cuts earlier this season beginning at the Mayakoba Classic in December. He didn’t manage to break 70 in six consecutive tournament rounds en route to three straight weeks of not playing the weekend. He responded as good as anyone can following missed cut No. 3 by pulling off an impressive come-from-behind victory at the Waste Management Phoenix Open, but it wasn’t exactly smooth sailing leading up to that week.

During a Wednesday press conference ahead of the Genesis Invitational, Koepka was asked whether or not he was getting antsy or impatient during his tough three-week stretch and how he handled those emotions. It turns out he took out his frustrations on a couple sets of irons.

“As far as leading up to [the Waste Management], yeah, I was frustrated. I snapped two sets of irons after playing Mexico and then after Torrey and I don’t really do that,” Koepka explained. “So there was quite a bit of frustration, but at the same time you’ve just got to stick it out. Yeah, I guess maybe it was a little bit of just frustration just because the result oriented. I felt like my patience is always there, it’s just sometimes results take a little bit longer. You’re doing the whole process, you’re doing it exactly how you want it, but the results might not be there and I think that sometimes you can get result oriented and I think that’s kind of where I was. But yeah, it’s nice to get that W now.”

Koepka certainly didn’t look too frustrated while being fed grapes by his girlfriend Jena Sims following his missed cut at the Mayakoba in Mexico, but I’m assuming the beach session came after a few clubs met his knee.

Brooks Koepka wasn’t kidding when he said today that he snapped clubs over his knee in frustration when he missed a couple of cuts late last year. These were once in his bag. 😂 pic.twitter.com/OZYeqxL8fJ