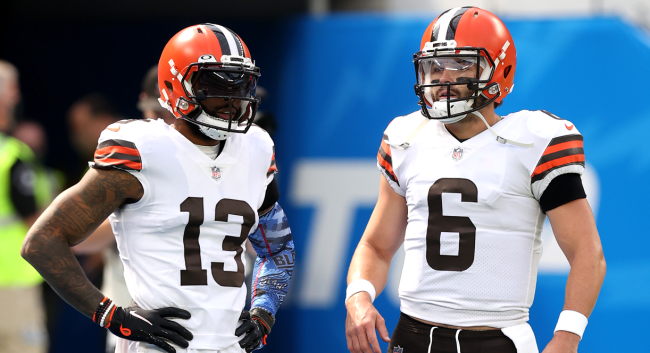 After going 11-5 and making to the AFC Divisional Playoffs in 2020 – the team’s first winning season since 2007 and first playoff appearance since 2002 – the Cleveland Browns regressed back to under .500 once again in 2021.

The season was filled with more drama than victories and led to the departure of wide receiver Odell Beckham Jr. and the Browns looking to trade their one-time franchise quarterback Baker Mayfield.

Players from the 2021 Cleveland Browns have been rather vocal during this offseason talking about what happened in 2020 and the future of the team’s former starting quarterback.

Two of those Browns players, cornerback Greg Newsome III and linebacker Jeremiah Owusu-Koramoah, recently spoke to the Varsity House Podcast about last season (their first in the NFL), next season, and the bad blood between Odell Beckham Jr. and Baker Mayfield that they say was a distraction in the team’s locker room.

“Odell got to be one of the best teammates that I had,” said JOK.

The two then explained how OBJ would help them out, no hazing, teach them things after practice, and other situations where he would go above and beyond.

“It was just so much, that relationship, those relationships, just from the whole entire thing was just off, honestly. It was just… and yes, it was distracting, but at the end of the day I still got to do my job. At the end of the day, we played defense so we don’t have to worry about the guy throwing us the ball. We ain’t got to worry about the guy that’s catching the ball. Like, we got to stop them.

Newsome continued, “So it was distracting for sure like there was definitely locker room talks.”

Related: Browns Teammate Made A Savage Comment About Baker Mayfield After OBJ’s Dad Ripped The QB

JOK and Newsome also spoke about some of the little things Beckham would do, even after he had been traded to the Rams, as well as their first impressions of new quarterback DeShaun Watson.

All in all it was a pretty fascinating conversation.