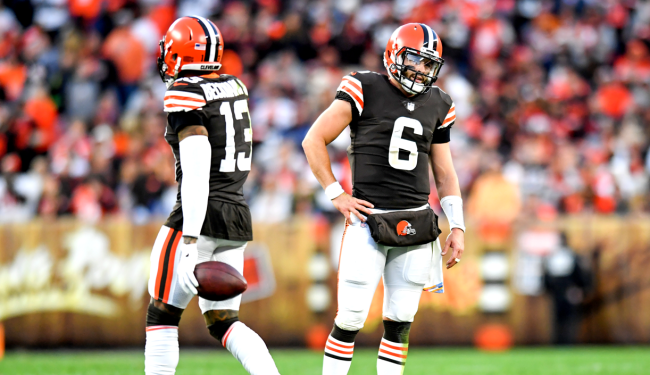 The Baker Mayfield saga in Cleveland just keeps getting worse for the 27-year-old quarterback. (Actually just about everything associated with the Cleveland Browns these days is a mess.)

The latest report says any trade the Browns might make with Baker Mayfield probably won’t happen until at least June, after OTAs and rookie minicamps are complete.

And now, after feeling disrespected by the Browns front office with their pursuit and acquisition of troubled Texans quarterback Deshaun Watson (who got a multi-year extension worth $230 million guaranteed), a new report claims some inside the Browns locker room won’t be sad to see Mayfield go.

Back in November of last year, Odell Beckham Jr.’s dad shared a 11 minute video on social media which showed how many times his son was open, yet Mayfield didn’t deliver him the ball.

OBJ would catch just 17 passes in six games for the Browns in 2021 – his third season working with Mayfield under center – with zero touchdowns. (By comparison, Beckham caught 27 passes, five for touchdowns, in eight games with the Rams).

Mayfield’s response? “Hurt? No. Surprised? Yes. There’s different things that factor into it. I’ve had conversations with his dad before, like a man, face to face,” he said. “I was pretty surprised by the video and the intention and feelings behind it.”

Notably, the one person who did not comment on the video was Odell Beckham Jr. himself. Not to the media, not even to Mayfield, according to reports.

Now, a report published by ESPN on Thursday shed more light on that sticky situation.

After Beckham’s father ripped Mayfield publicly and speculation grew about Beckham being on his way out, multiple players lobbied for Cleveland to keep OBJ on the team.

“I feel like the majority of this locker room would love to have him in this building,” safety John Johnson III said then. “Flat out.”

As one source put it, the way Beckham exited Cleveland “poisoned the well” for Mayfield with some teammates.

Shortly after Browns coach Kevin Stefanski announced Beckham wouldn’t be coming back, another starter was asked if he’d seen the video Beckham Sr. had posted of Mayfield misfiring on throws to his son. “Why would I watch the video?” the player asked rhetorically, according to a source familiar with the remark. “I see it every day in practice.”

Interestingly, a perhaps also very telling, during this offseason Odell Beckham Jr. has not ruled out a return to the Browns “because he loved his teammates and Browns fans.”

Of course, that was reported after the Browns had acquired Deshaun Watson.

John Johnson via IG live: “OBJ coming back. You ain’t hear it from me tho.” pic.twitter.com/WwWQUtAk5Q