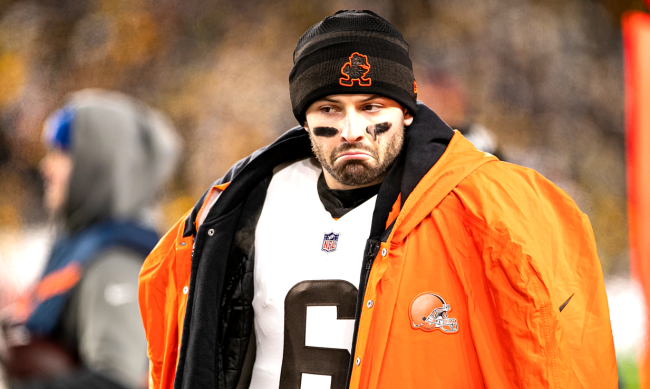 By the time the Cleveland Browns had finally consummated the deal to acquire troubled quarterback Deshaun Watson from the Houston Texans, the team’s relationship with its current QB, Baker Mayfield, was already circling the drain.

A few days before the Browns traded two picks in this year’s draft along with two more picks in 2023 and 2024, Mayfield publicly asked to be traded.

Having been told that they were out of the running for Deshaun Watson, the Browns flatly told Mayfield that were “not accommodating his request,” according to reports.

A few days later, Deshaun Watson was a member of the Cleveland Browns.

So what happened to cause the rift between the Browns and Mayfield and was so bad that the 2017 Heisman Trophy winner decided he wanted to be traded?

On the same day back in March when the Browns’ brass had a meeting with Deshaun Watson, Mayfield posted a cryptic thank you note to Cleveland fans on social media, making it seem as if he was leaving, but going as far as to ask for a trade.

ESPN now reports “the final straw for Mayfield, according to multiple sources, came on March 16, when ESPN NFL insider Chris Mortensen said he believed Mayfield’s time in Cleveland was over and that he was told the Browns wanted ‘an adult’ at quarterback.”

“They’re breaking up, regardless of whether or not Deshaun Watson ends up Cleveland, the one thing that I was told is that it’s just not a match emotionally, whereas Baker Mayfield’s passion and emotional leadership were embraced in Oklahoma and even in the beginning with the Browns, things have changed and they want what they consider an adult at the position,” Mortensen reported.

A day later, Mayfield publicly asked to be traded. A day after that, the Browns traded for Watson. Shortly after that, Browns owner Jimmy Haslam claimed the “adult” comment did not come from ownership.

“Contrary to what is out there in the press, we think highly of Baker and did not get down on him,” said Haslam after the trade. “[I know] Baker felt that [“adult” comment] came from ownership, but that’s not true. Baker gave it everything he had while he was here. Nobody can question his effort this past year, and nobody can question the four years he gave to the city of Cleveland.”

Almost two months later, and with the NFL Draft complete, Mayfield still has no idea what his future holds.

The latest report says the Browns will probably wait until after OTAs and rookie minicamps are complete, meaning a trade may not happen until at least June.

Right now, though, the key sticking point to any trade involving Baker Mayfield may be the fact that his $18.86 million salary for 2022 is fully guaranteed. No way the Browns would be willing to keep Mayfield, right? That would mean Cleveland would be on the hook for over $64 million in 2022 just for two quarterbacks – one of whom may not even be allowed to play. Then again, they are the Browns.