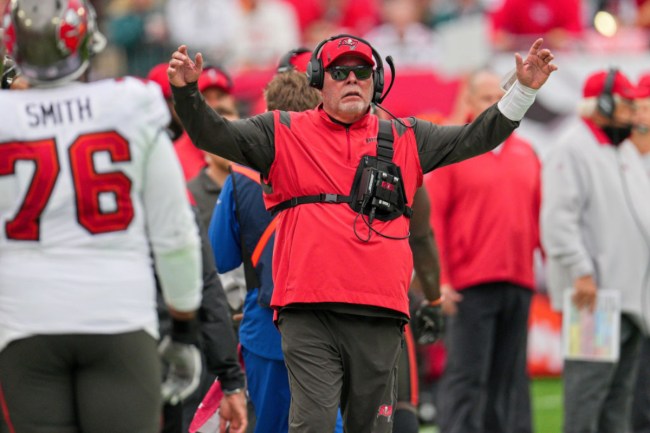 Maybe the most exciting thing that happened during the Buccaneers’ 31-15 win over the Eagles this past weekend involved Tampa Bay head coach Bruce Arians, and his hand meeting the side of a player’s helmet.

During the third quarter with Tampa Bay up 17-0, Philadelphia return man Jordan Reagor muffed a punt that was picked up by the Bucs. Seconds after the Bucs recovered the ball, Arians was seen going over to safety Andrew Adams and smacking him across his helmet.

While the initial replay didn’t show why Arians was so angry, it was later revealed that Arians was reacted to Adams pulling an opposing player off of his teammate. This would typically result in a 15-yard penalty, and while Adams got away with it, he didn’t escape Arians’ left hand.

To no real surprise, the NFL has punished Arians for his actions and reportedly hit him with a $50,000 fine for striking Adams in the head. Arians has said that he will be appealing the steep fine.

Bruce Arians Explains Why He Slapped A Player Across The Helmet

After the Bucs’ win over Philadelphia, Arians was asked about the incident made it clear that he was simply trying to avoid a dumb penalty.

“I’ve seen enough dumb [things]. You can’t pull guys out of a pile,” Arians explained. “We just got a big play, great field position, and he’s trying to pull a guy out of a pile and I was trying to knock him off of that guy so he didn’t get a penalty.”

NFL fans had mixed reactions to the news of Arians being fined for smacking Adams:

Should've been given $50,000 for saving the team from a whack ass taunting flag. https://t.co/ZK9a4pbHGN

The game has gone soft. https://t.co/xVcaHk13gL

This is needed, no debate. Take action on his treatment of AB though. https://t.co/hRXBVZEnx0

This is so ridiculous lol https://t.co/d8WnOf1C0i

Should have been much more, but at least they did something https://t.co/7mw72WwqHt