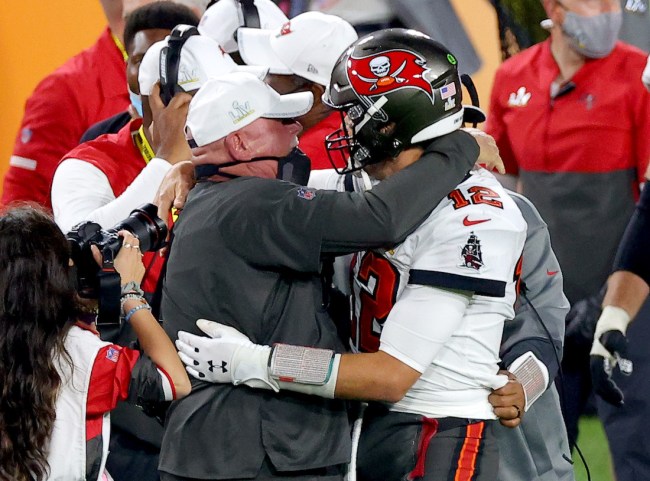 Now that Bruce Arians has led his Tampa Bay Buccaneers to a Super Bowl 55 championship, forgive the guy if he wants to gloat a little bit. After all, a football lifer, the 68-year-old Arians became the oldest head coach in NFL history to win the Lombardi Trophy, so he’s been waiting a long time for his chance to be crowned as a champ.

Of course, having two future Hall of Famers like Tom Brady and Rob Gronkowski sure makes it a little bit easier to win a Super Bowl, don’t you think? Brady has seven of them now, and Gronk has four of his own, so the duo knows something about this whole winning thing. That doesn’t diminish what Arians accomplished — he brought together a team of huge personalities with no offseason and won a Super Bowl — but 31 other NFL coaches would love to be in his position with two of the all-timers at their positions.

Considering Bruce Arians was able to convince Brady to leave New England for Tampa Bay last offseason was already a huge accomplishment. Getting Gronk to join the quarterback was the cherry on top of that GOAT-designed cake. And now Arians is out here talking about his relationship with each, acting as if he’s been coaching them for years.

Per the Los Angeles Times:

“I told Tom, ‘If you come here, we’ll win the Super Bowl. You’re the missing ingredient. We’re a very talented team, but they just don’t know it,’ ” Arians said of the multi-team courting process that captivated the sports world and ended last March with Tampa Bay winning the Brady sweepstakes.

Not surprisingly, the meticulous Brady had done his homework.

He knew everything about us. I’m trying to do the sales pitch, ‘Hey, Florida’s great, it’s warm, no taxes. And we do have [receivers] Mike Evans, Chris Godwin, all these guys.

“And he said, ‘Hey, I think Gronk might want to come out of retirement,’ ” Arians recalled, referring to All-Pro tight end Rob Gronkowski, who caught two of Brady’s three touchdown passes Sunday night. “I said, ‘Let’s get you signed up first and then we’ll work on that one.’ It was just a constant collaboration. That getting to know each other and that growing process is just so much fun.”

Like I said earlier, go ahead and gloat, Bruce, ’cause you’ve deserved it after winning yourself Super Bowl 55. Problem is, there’s a guy up in New England named Bill Belichick who might be just a little pissed off with your comments following the details of pitching Brady last offseason. That’s because, without deliberate disrespect, Bruce Arians pretty much crapped all over the “Patriot Way,” and described a much more laid back approach to coaching Tom Brady and Rob Gronkowski this season.

Brady and Gronkowski were coming from the buttoned-down world of New England, where the seemingly robotic and ruthlessly efficient “Patriots Way” ethos resulted in nine Super Bowl appearances for the quarterback and six Lombardi Trophies.

Like the untucked and typically easygoing Arians, the Buccaneers send off a more relaxed vibe.

“You’ve got to be super involved as a coach, but with him it’s not about Xs and O’s,” Arians said. “It’s making sure he’s comfortable and feels good about the game plan and work week. He’d text me and say, ‘Do you mind if I don’t throw Wednesday?’ I was like, ‘Yeah, I don’t care.’

“I’d ask him, ‘Do you want to take mental reps or do you just want to sit back?’ He’d say, ‘I just need to sit back.’ And we did that two or three times during the season.”

Clearly, Brady grew to appreciate that.

“Even with Gronk I’d say, ‘Dude, you’re not practicing on Wednesdays. I need you on Sunday. I don’t need you on Thursday,’ ” Arians said. “And he was like,’Oh, man, I’ll be fresh. I’ll be like, super.’ I told him that if he ever needed a day off, he should just let me know. Because he never had days off before.”

Absolutely hilarious stuff here from Arians, who, without even knowing it — or maybe just doing it ever so slyly — completely trolls Belichick and his cadet-like approach with the Patriots. Bill Belichick doesn’t often take L’s, but seeing his guys win Super Bowl 55 with another head coach is definitely one of them.

While there were early reports of dysfunction in Tampa Bay between Bruce Arians and Tom Brady, and the lack of involvement for Gronk, it’s all water under the bridge now, because the Bucs are champs, baby. Somewhere, Bill Belichick is in a dark corner, knowing he could never cater to his superstars the way they got pampered with the Buccaneers all season long.

Belichick spent over two decades with Brady, and a decade with Rob Gronkowski, so he’s got to be a little bitter seeing Bruce Arians treat both as if he’s the one who made these guys the players they are today.