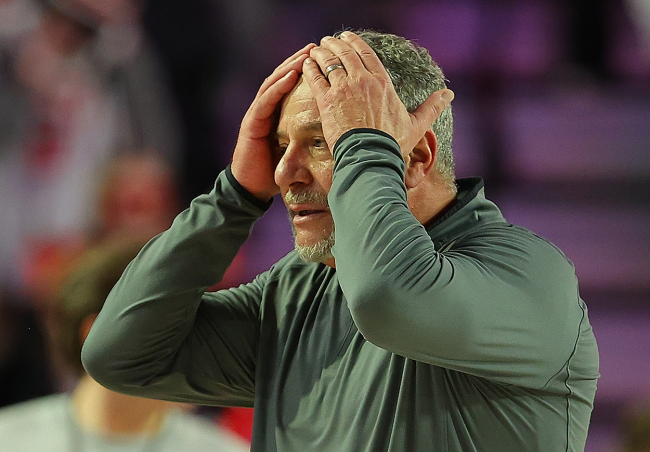 Late last week, a report surfaced out of Alabama that speculated that Auburn head football coach Bryan Harsin’s job may be in jeopardy. Since then, Harsin has vehemently defended himself, his daughter has pushed back on former players calling out her father, a myriad of players have come out in support of Harsin, and the university released a statement on Monday morning.

Not long after the statement was released, Auburn’s head basketball coach was pulled into a routine media session. While there, he was asked a rather timely question.

Harsin was not directly named in the question. However, it was indirectly about his colleague’s current situation.

Pearl was asked about how he has handled public speculation about his future in a job in the past. In turn, he gave a very non-confrontational, bizarre non-answer answer.

Here is what Pearl had to say:

“Oh, gosh: When you’re in coaching, it’s kind of like “The Godfather,” when Hyman Roth says, ‘This is the profession we’ve chosen.’ And so we chose the profession because we wanted to teach and be around young people and make a difference in their lives. People don’t actually choose coaching or teaching for many other reasons. If you wind up getting good at it, maybe there’s an opportunity to coach at the higher levels. Then, all of a sudden, it becomes financially a successful and a great profession.

“But I chose to coach, and for 45 years, we didn’t live in a big house. We lived paycheck to paycheck, because I was an assistant coach. I was a Division II coach, I was a mid-major coach. All my college friends and all my peers, they were able to take care of their families way better than I was, financially. So we do this because we want to make a difference in young people’s lives. We want to give back to our campuses and our communities and our universities. But we also understand the pressures that go with the position.”

Peal’s answer doesn’t really say much. In fact, it was actually more confusing than if he had said that he doesn’t want to comment on another man’s business.

Meanwhile, Harsin’s future with the Tigers remains up in the air.