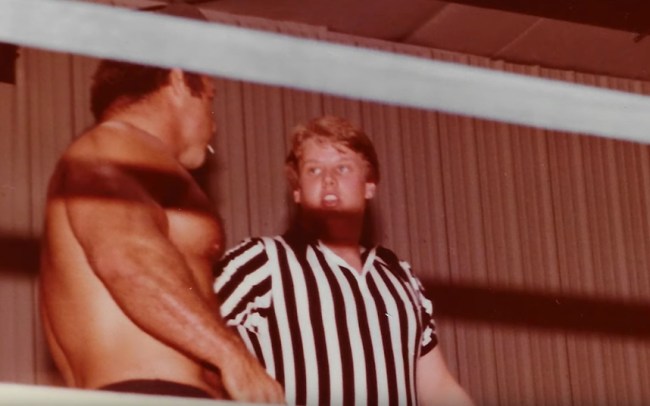 Bruce Prichard has done just about everything in the professional wrestling business. He’s been a booker, manager, and producer, a member of several creative teams, and a senior executive with the WWE.

He was also one of the greatest heel managers in WWE history.

Prichard is now the cohost – with longtime friend Conrad Thompson-  of the popular podcast Something To Wrestle.

I once had the privilege of interviewing Prichard for a piece about enhancement talent. We spoke on the phone for about an hour. He was a nice guy, funny as hell, and gave a great interview.

Prichard has been in the business almost since birth. He cut his teeth in Houston, Texas working for legendary wrestler and promoter Paul Boesch.

Prichard sold posters for Boesch’s promotion at the age of 10 and eventually moved into the ring to work as a referee.

In this cut footage from the Viceland docuseries “Dark Side of the Ring”, Prichard talks about former wrestling star Gino Hernandez “getting heat” – basically getting a crowd to hate your guts – and recalls a night in Port Arthur, Texas in the late 1970s when a pre-determined match turned into a real life-or-death situation.

The crowd then decided to take matters into their own hands, and all charged the ring – belts in hand – to take care of Hernandez, a 16-year-old Prichard, and anyone else dumb enough to fight a faction of pissed of wrestling fans.

Luckily, a guy with a gun got involved.

You’ll see what I mean.

I recommend watching the entire series of “Dark Side of the Ring” on Viceland.

Here’s a rundown of the best episodes.