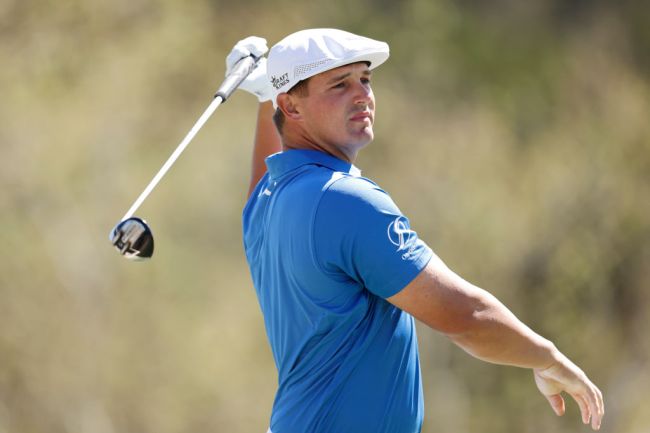 Given the fact that Bryson DeChambeau is the longest-hitter on the PGA Tour, he takes different, more aggressive lines off the tee when there is an advantage to be had. We saw him take absurd lines at Winged Foot during his U.S. Open win, and more recently an aggressive line over water at Bay Hill during his win at the Arnold Palmer Invitational.

Taking these aggressive lines doesn’t always work out, however, and DeChambeau’s attempt to drive the 10th green at the WGC-Dell Technologies Match Play on Thursday is an example of that.

DeChambeau held a one-shot lead over Si Woo Kim at the time, and after losing his first match to Antoine Rozner, this was a must-win match for ‘The Big Golfer.’ He saw this as a good time to make a statement and attempt to cut the corner, and take his tee shot over trees in an attempt to drive the green on the 371-yard hole. He did not drive the green. His tee shot found a tree and traveled a whopping 46-yards to the ‘unknown.’

Sometimes, when golf decides to be at its cruelest/funniest, even the longest hitter in professional golf can smash his driver no longer than 46 yards.

A rare occasion when Bryson DeChambeau’s power and speed goes against him. pic.twitter.com/MAdHxU2g4n

The screenshot of shot tracer made the rounds, but then actual video surfaced from a spectator at the event that witnessed the drive.

Bryson DeChambeau on his drive at No. 10 Thursday:

"Hey, look, I was trying to drive the green …" pic.twitter.com/O9RJIjC5bg

DeChambeau lost the 10th hole with a bogey, and lost the 11th as well, but flipped the switch and won three of the final four holes to beat Kim 2 &1. After the win, DeChambeau explained his thought process off the 10th tee. According to him, he could have “easily” pulled the shot off, but didn’t catch the center of the face.

“I heel-pulled it lower than I wanted, it came off low off the face, it came out low,” DeChambeau said. The ball struck a branch on the left side and rebounded backward and to the right, where it settled by the practice putting green.“I could have easily cleared the trees up and over like I wanted to, but I hit it on the wrong part of the face and consequently hit the tree limb. Hey, look, I was trying to drive the green, whether it was the practice green or the 10th green, I got it close.”

I suppose you have to tip your cap to DeChambeau for attempting the shot in a pivotal match. If he pulled it off, it would have been spectacular. Hitting a 46-yard drive and losing back-to-back holes would have been pretty deflating for most, but the fact that he reeled off a comeback over the final four holes afterward is wildly impressive.